Meeting of European organisations in the field of memory and remembrance 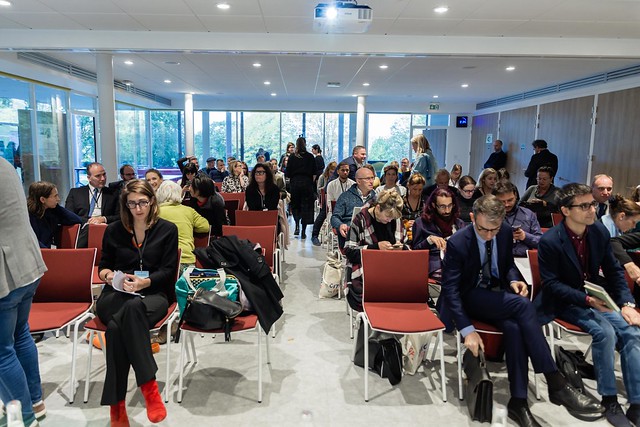 The two-day meeting “Taking stock of European memory policies” started on October 23 at the Hotel Meliá La Defense in Paris with an opening session. In his welcome address, Baudouin Baudru, Head of the representation of the European Commission in France, stressed the importance of fighting fake news and negationism. He highlighted that monuments can help to better understand the past, but testimonies are fundamental to translate what happened. The Ambassador of Finland in France, Teemu Tanner, represented the presidency of the Council of the European Union. His speech underlined the respect of identities and the rule of law, as well as the role of conferences and education projects for enhancing those common European values.  The Head of the Office of the European Parliament in Paris, Isabelle Coustet, recalled the resolution of 19 September 2019 on the importance of European remembrance for the future of Europe.

The coordinator of the EUROM, Oriol López, thanked the cooperation of all the participants as well as the organizational efforts added by the European Commission and the Maison Jean Monnet in this second edition of the meeting. He highlighted the importance of the collaboration between institutions and civil society organizations and stressed that memorial processes are a fundamental piece for building fairer and more democratic societies.  Marie Corman, the police officer in charge of the Remembrance strand within the European Commission, emphasized that diversity and cooperation are the essence of the Europe for Citizens programme. The session ended up with the screening of the documentary film  “1948-2018: réveil de la Guerre froide?” introduced by its director, André Bossuroy (MEDIEL asbl). The movie is the result of a media education project on the 70th anniversary of the beginning of the Cold War and aims to understand the meaning of the European construction and its values, stimulate reflection on the European Union and its history, and promote peace, tolerance, dialogue, and reconciliation.

On October 24, the participants were received at the Jean Monnet House by its director, Martí Grau, who introduced the programme of the day. He presented some details on the figure of Jean Monnet and introduced the museum house of Bazoches-sur-Guyonne where the Father of Europe drafted the so-called Schumann declaration in 1950. The first session consisted of a debate on the challenges of the European public memories. Moderated by Ricard Conesa, project manager at the EUROM, the table included presentations by Markus Prutsch, principal investigator and administrator for Culture and Education Policies at the European Parliament, and Sarah Gensburger, laureate researcher of the CNRS for the project Building an Interdisciplinary Science of Memory.

Prutsch addressed the concept of European historical memory. He described it as the collective understanding of the past, different from historical truth. After analyzing the construction of historical memory at the national level, he presented some of the most common ways of adopting those narratives at a supranational level. Gensburger discussed the issue of human rights throughout the education of the Holocaust in France. She called the attention for the natural distortions of the concept of memory, such as social economics and gender issues,  not usually taken into account. According to her, the social appropriation of the past shall deal with the complexity of promoting inclusion, equality, and emancipation in the present. Further, Gilles Pelayo, Head of Europe for Citizens programme at the Education, Audiovisual and Culture Agency (EACEA), presented the main guidelines for implementing projects supported by the programme.

After a short break, the assistants gathered in small groups for the first round of workshops dedicated to share practical experiences and to address the challenges of their projects on youth participation, cultural heritage, critical judgment, and citizenry. The second workshops’ sessions were held after lunch and were dedicated to the discussion of the European dimension of remembrance action at the grassroots level, communication tools, citizens’ engagement, and the sustainability of the projects after theirs conclusion.

The discussions resulted in the following recommendations, presented at the end of the meeting:

1. How to involve young people in remembrance activities?

Recommendation for ongoing projects Adopt a highly and comprehensive participatory approach, by involving the target group (young people) in the whole project life cycle (projecting, co-creating the contents, dissemination, and so on) as well as the participants of the former projects, in particular in sharing their testimonials.
Recommendation for future projects on remembrance at EU level Considering the rich interactions and the tight and multifaceted links of European history with the history of the populations of all continents, broadening the scope of the programme by opening it to extra European countries (also as project leaders).

2. What are the best ways for cultural heritage projects to link past and present and address issues such as racism, genocide, and intolerance?

Recommendation for ongoing projects Incorporate a critical perspective of the « othering process ». Use emotions but link them to historical facts & current issues. Adopt an inclusive historic approach, by including minority groups’ history/perspective (colonial history, gendered perspective, etc… ). Use a reflective process to ensure the effectiveness and continuity of your project.
Recommendation for future projects on remembrance at EU level Have a sort of positive plan of action, something that you can take back with you to know how to engage – this ensures citizens feel responsible & appropriate their history

3. How to approach the past from multiple perspectives, deal with conflicting memories and develop citizens’ critical judgment?

Recommendation for ongoing projects Historical facts should be the starting point for tackling multiperspective. Multiple perspectives should represent diversity (different generations, social backgrounds, minorities) and not only go beyond national borders.
Recommendation for future projects on remembrance at the EU level We need to re-visit primary historical sources and use new tools to make them more accessible and attractive. We should search for an inclusive way to tell the story.

Recommendation for ongoing projects Making history a personal experience, looking for a balance between professional work and citizens participation, and focusing on multi-sectorial partnerships (educational system, museums, city councils…)
Recommendation for future projects on remembrance at EU level Taking into account the challenges of co-funding, the issues related to the timing and putting efforts to make decision-makers aware of the values that remembrance projects promote

5. How to strengthen the European dimension of projects while also enhancing action at the grassroots level? How to identify potential partners and cooperate with other European programmes?

Recommendation for ongoing projects Promote a good, structured partnership, where partner learns from each other and identify strengths to optimize the project at different levels: local, national and transnational.
Recommendation for future projects on remembrance at EU level Include transnational dimension (e.g. through topics) in local initiatives environment

Recommendation for ongoing projects Use a project webpage and research on which platforms your target audience is the user.
Recommendation for future projects on remembrance at EU level Strive to use the most cost-effective tools available (google translate and network capacities) while encouraging multilingualism

7. How to reach out to less active citizens and under-represented groups?

Recommendation for ongoing projects Visit clubs, associations, door-to-door action. Appel to mediators.
Recommendation for future projects on remembrance at EU level Accept them, getting to know them and finally include them in the project life cycle (ask them about the issues that they are concerned about, topics they are interested in, etc…). Put forward the sense of co-ownership of the project.

8. How to make results sustainable beyond the project’s lifetime?

After the presentation of the workshops’ recommendations, the participants attended a public event about the education of European memories, organized in the framework of the cycle Conversations sur l’Europe commemorating the 40th anniversary of Jean Monnet’s death. The roundtable counted with the participation of Kaja Sirok, director of the National History Museum of Slovenia, Antoine Arjakovsky, of the Collège des Bernardins, and Andreas Holtberget, project coordinator of Euroclio.

The meeting ended up with an emotive performance by Carla Ryan of the theatre piece At Summer’s End promoted by Smashing Times International Centre for the Arts and Human Rights. The play by young writer Féilim James tells the story of Ettie Steinberg, a Jewish-Irish woman murdered during the Holocaust. Before leaving back to Paris, the participants took a guided tour to the museum of the Jean Monnet House.