Project partners met in Ljubljana for the kick-off meeting to discuss the final methodology for the project implementation, appoint the working team, finalize the programme, and define the valorisation strategy. The event involved 10 citizens, including 7 participants from Ljubljana (Slovenia), 2 participants from Warsaw (Poland) and 1 participant from Barcelona (Spain). The meeting took place in Ljubljana, Slovenia on 15 and 16 January 2018.

Internationally acclaimed lecturers, Dr. Hrvoje Klasić from the University of Zagreb, Dr. Mary Nash from the University of Barcelona, and Dr. Piotr Osęka of the Institute of Political Studies of the Polish Academy of Sciences, presented papers highlighting the circumstances of 1968 in different cultural and political contexts, unearthing their common European dimension. Lectures were followed by a panel discussion that attracted students in particular. The event involved about 156 citizens, including 52 participants from Ljubljana, Slovenia, 52 participants from Barcelona, Spain, and 52 participants from Warsaw, Poland. It took place on 16 March 2018 in Ljubljana, Slovenia, on 19 April 2018, Barcelona, Spain and on 9 May 2018 in Warsaw, Poland.

Testimonies accompanied by article and video interviews reflecting 1968 were collected in Memory Archives in the partner countries. In Slovenia, they were collected on the MMC news portal. In Poland, they are available at www.audiohistoria.pl while in Spain, they are collected in this document produced by the participants.

Students from all European countries as well as from the USA, Armenia, Philippines, Turkey, and Palestine participated in the in Instagram contest In Search of Freedom to share their vision of freedom in 2018. Lasting from 1 February to 30 May 2018, more than 400 entries were collected, the best of which were awarded and exhibited.

The international travelling exhibition, a joint effort of all three partners, was first put up at the National Museum of Contemporary History in Slovenia (16 June 2018-16 July 2018), travelling to Warsaw, Poland (6-30 September 2018) where it was put up in the History Meeting House, and finally reaching Spain, where it was displayed at a prestigious and symbolic venue of the Castle of Montjuïc in Barcelona (29 November 2018-30 June 2019). It can now be viewed as an online 360º version.

The book of essays In Search of Freedom: 1968-2018 features essays by the guest lecturers as well as students from partner countries and images collected in the Instagram contest and the Memory Archive. It is available in English and Slovene in print as well as in e-book format. More than 25 participants, including authors of essays, photographs, translators, editors, language editors, proofreaders, and designers contributed to the making of the book: 15 from Slovenia, 5 from Poland, and 5 from Spain.

The final activity of the project was the production of the workshop study module on the civil rights movement for students. The module presents a historical introduction to the subject of the protest movements in 1968, highlighting its transnational relevance. Five people from Spain worked to produce it. 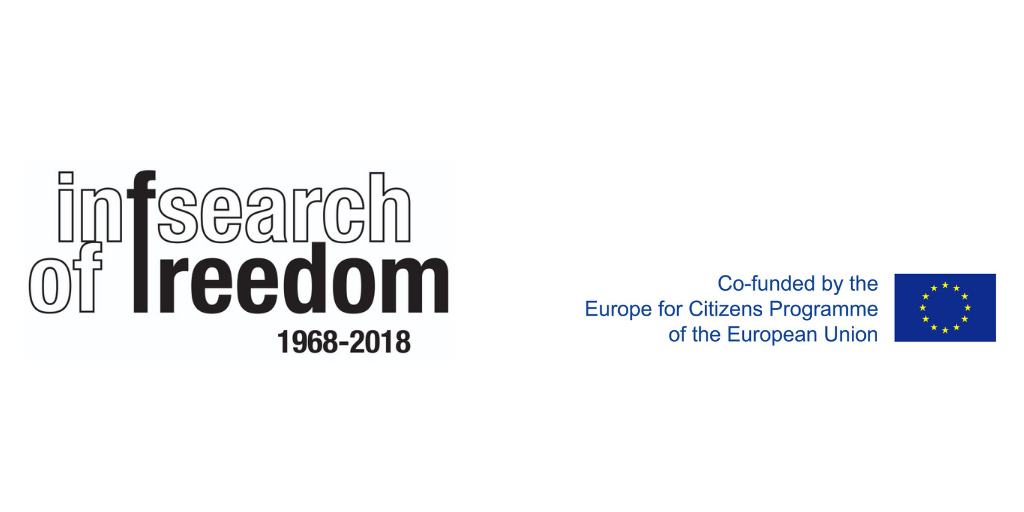