Social media are essential platforms for the transmission of all kind of content and have become an important arena for the confrontation of stories, including those related to the past. But who is producing those messages and for what purpose? How do these messages evolve and what interaction they have with users? How do memory conflicts develop in this arena? What is their real impact?  In order to interpret and answer some of the questions that arise from the conflicts of the past in the digital dimension, the European Observatory of Memories (EUROM) has started a new project to keep track of the online memories that flow on Twitter. This project aims to analyze the messages and the behavior of social media users regarding certain European commemoration and emerging memorial debates.

Known for promoting a fluid interaction between users, Twitter is one of the most used digital networks all over the world. Born in 2006,  in April 2018 it reached 330 million users around the world according to Statista.com. At present, it is impossible to understand the world of politics and culture without taking into account the influence and conditioning entailed by this social media that allows users to write and receive short messages of up to 280 characters (tweets) in real time, characterized as a platform for the dissemination of institutional and private messages throughout microblogging, social networking and instant messaging services. Like other social media, Twitter reaches young generations in a transnational sphere, with no other border than the linguistic limitations of the users.  This virtual audience is also characterized by its engagement, and in the case of memory-related debates, it is worth to mention the participation of generations that have not experienced the recalled events.

The first phase of the project is dedicated to analyze the impact of the messages on some of recurring acts of homage and commemoration in Europe: the International Holocaust Remembrance Day (January 27), the day of the liberation of Mauthausen concentration camp (May 5), Europe Day (May 9), and the European Day of the victims of Stalinism and Nazism (August 23). How are these days commemorated online? Which ones have more repercussions and which are the most controversial? What are the most repeated messages? Who are the people and the institutions with the greatest influence in Europen memories? 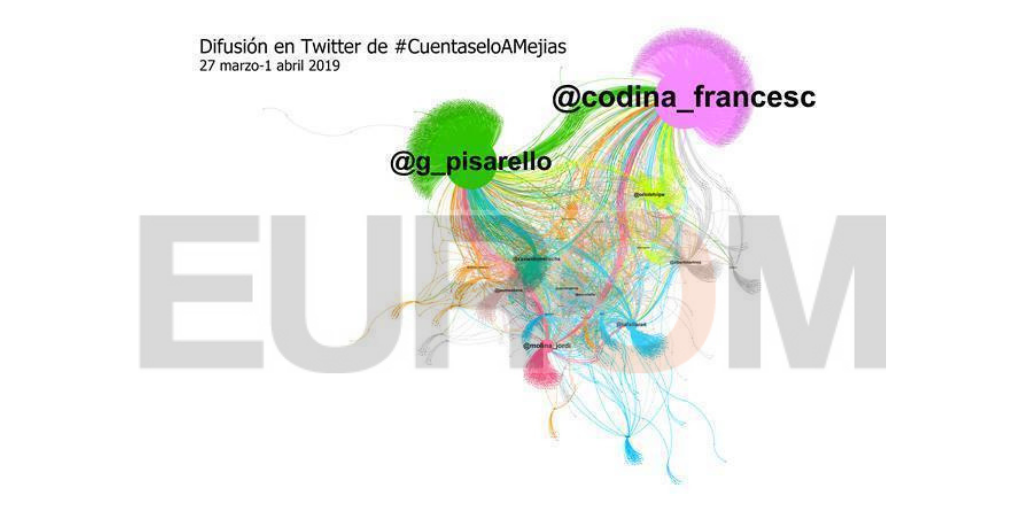 In a regional scale, the project is following the stream of messages around the exhumation of the dictator Francisco Franco in Spain and the future of his immense mausoleum, the Valley of the Fallen (Valle de los Caídos), one of the most megalomaniac Fascist constructions that remain in the continent. And in the local level, it deepens on a specific but surprising controversy that emerged in Barcelona this year when the City Council installed a signposting to explain the Francoist repression in front of the police station of Via Laietana, a well-known torture site during the dictatorship. During its presentation by authorities and memorial associations, the polemics overflowed the local debate on Twitter and gave rise to new testimonies and stories of witnesses under the hashtag #CuentaseloAMejias.