The main outcomes of this project will be an exhibition and a policy brief that aim to provide administrations with the necessary tools to readily face these processes, both for the victims and their families and for society as a whole. Beyond defining the objectives of new memorials, we should refer to them in a comprehensive way. Thus, a frame of action will be necessary to take steps in the post-terrorist memorialization processes, a methodology of “monumentalization” in public space. How should we communicate through these memorials? What languages should be used? Is the interlocutor taken into account? All this has a special relevance and is connected not only to internal processes but also to official discourses and public attitudes.

This project observes memorialisation as a part of a social and personal recovery after mass-violence. This is particularly important and somehow neglected aspect of remembrance, despite the ascendance of the memory paradigm within all policy domains and its nonapplication to resilience building. To know if current memorialisation policies are effective, it is necessary to provide a critical account of remembrance as a component of the healing process for victims, their families and the general public. Research suggests that memorials do not always act as a unifying force for social groups. Sometimes they can also deepen the lines of division and further lacerate the wounds inflicted by tragedy and violence.

Over the last three decades, the term “memory” has seen an inflationary dissemination, a sort of pathology of our modern societies. The current upsurge in the construction of memorial sites revolves also around mass production and consumption of memory. On the one hand, we overproduce memory using obsessively memorial language and tools. On the other, we are terrorised by the forgetting, or the absence of memory. Not remembering or wanting to forget is associated with amnesiatic or denial state. Our infatuation with memory and memorials might be the real reason why we do not discuss anymore whether and why to memorialise but rather ponder on how.

How we handle memorialisation often depends on who is directing the process, and importantly what role is assigned to memorials. Differently from the past that celebrated survival, resistance, victories, and heroes, our present is built on monuments that primarily commemorate trauma. The purposes of these memorials are multiple: as a form of symbolic reparations, justice for the victims, acknowledgment, tools for dealing with the past. Memorials are conceived as ethical and political promises of non-recurrence that clearly have a didactic end. They are meant to teach future generations the lessons from the past so that tragedies of the history cannot repeat again. Yet, not only the tragedies of the past linger in our political present. Terrorist attacks, natural and man-made disasters, are forcing us to rethink how we remember and what purposes we assign to memorials.

In Western societies, grassroots memorialisation has now become a socially accepted practice of mourning in a public space. Grassroots memorials are objects which serve as a focus for memory of something (an event) or someone (a person who has died).  Usually, they mark an untimely death and can be found in the streets, hospitals, parks, schoolyards. Numerous memorials have been created worldwide to commemorate the terrorist attacks. From 9/11 to the Toronto attacks, society itself has taken the role of a memory actor. Memorialisation is used to express solidarity and closeness, to mourn and grieve. Grassroots memorialisation, therefore, is directed towards survivors and those who perished, but also towards the society itself — seen as a victim of a collective tragedy.

But the main purpose of these memorials is to address therapeutic needs of their makers – individuals and communities. In the aftermath of violence, memorialisation in a public space helps shell shocked populations to process the impact of unexpected loss and violence. The recent terrorist attacks around Europe, however, have shown that grief transcends the sphere of personal and national. The images and stories of these memorials are replayed countless times through media forging communities around crises. Individuals and communities that did not suffer a loss have used memorialisation to express their closeness. It is through solidarity in grief that many grassroots monuments have been created in the cities and countries around the world. To remember the victims of Berlin attacks or London bombings, national landmarks such as Burj Khalifa in UEA or Tour Eiffel lit in colours of Germany and UK. Flowers and candles were left at the doorsteps of the British, Canadian or French embassies. In Spain, new memorials remember the victims of the attacks in Madrid (2004) and Barcelona (2017) cohabitating with older monuments devoted to the victims of ETA bombs.

Differently from grassroots memorials that attract very large numbers of people, permanent memorials and annual commemorations don’t have the same emotional resonance. On the first anniversary of the attacks in Paris (2015) officials unveiled small plaques at each of the three bombing sites. One year after the attacks on the London bridge, the Tree of Healing was planted. In Brussels, a permanent memorial was created by the government at the Schuman Square.

In all of these cases, annual commemorative ceremonies followed the same script. Minutes of silence were marked, names of the victims read, wreaths laid. No political speeches were delivered on the day of commemoration, and no references to the causes of violence made. This is understandable seen how polarising and difficult the issue of terrorism and security has been. But the criticism of the victims’ families and survivors that emerged in response to top-down memorialisation of the terrorist attacks is also similar across the EU. They see a strong contrast between societal and political remembrance and want to contribute to the process of distilling the meanings and values from the tragic event and shaping the knowledge about the terrorist attacks. 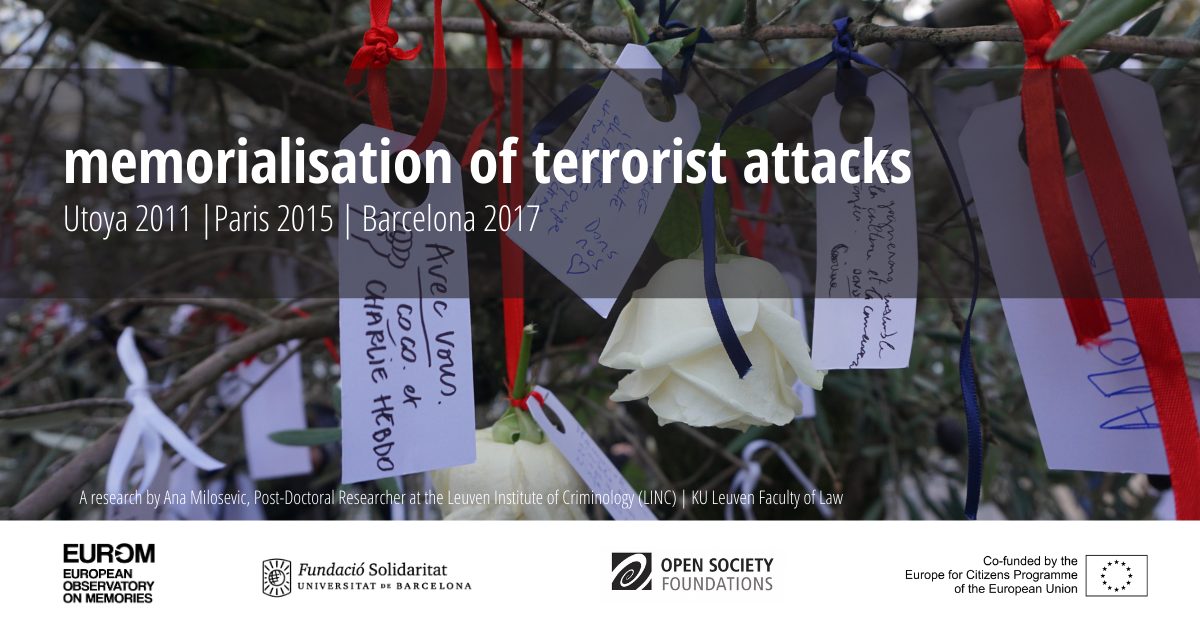