Barcelona, March 9, 2018. A mural paiting in tribute to the victims of the Holocaust and dedicated to the Spanish Republicans deported to the Nazi camps has been integrated this month into the landscape of the Historic Building of the University of Barcelona. The graffiti «In memory of the victims of the Holocaust», carried out within the framework of the activities of the European Observatory on Memories (EUROM) with the support of the City Council of Barcelona, will be exposed until March 22 in the garden square of the Josep Carner building (access by Carrer d’Aribau, 2).

The creation is signed by the urban artist Roc Blackblock and was painted live at Plaça del Rei in Barcelona between January 23 and 25. It was inaugurated in the Museum of History of Barcelona (MUHBA) on January 27, on the occasion of the International Holocaust Remembrance Day. Twelve students of the first year of the artistic baccalaureate of the Institut Moisès Broggi of Barcelona collaborated in the performance. They previsously took part in an informative session about the Holocaust and memorial art in the public space, taught by the historian and director of EUROM, Jordi Guixé, and by the same artist.

The mural is inspired by the graphic novel Maus, by Art Spiegelman, and was conceived as a traveling work, with the concern of transmitting the memory of the Nazi genocide to the new generations. Based on a mixture of iconic, artistic, testimonial and documentary elements, the mural illustrates the multiplicity of victims of the Holocaust and pays homage to the Spanish Republicans deported to Nazi concentration camps during Franco’s dictatorship.

The work will be presented at the University of Barcelona on Tuesday, March 13, at 7 pm. The act is open to the general públic and will count with the participation of the Vice Rector for Equality and Social Action of the UB, Maite Vilalta, and the Vice Rector of Arts, Culture and Heritage of the UB, Salvador García Fortes. Also involved are the director of the project, Jordi Guixé; the curator of the exhibition and professor at the Faculty of Fine Arts of the UB, Núria Ricart; the artist responsible for the creation and execution of the mural, Roc Blackblock, and the teacher of the Institut Moisès Broggi Fanny Figueres. 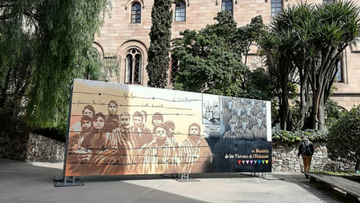