The European Observatory on Memories organizes its first international symposium

In recent years, numerous projects and initiatives have been undertaken in Europe and the rest of the world on the history and memory of the twentieth century. The growing interest in recent history, in both the academic and scientific field and within the civil society movements, has led UB Solidarity Foundation and the Research Group on Memory and Society of the University of Barcelona to create the European Observatory on Memories, an organization composed by several European institutions to analyse and understand the different historical and memorial processes of our recent past.

“The Observatory wants to create a unique multidisciplinary and transversal network on memories. Its aim is to observe and analyse how memory policies are developed in Europe”, states the director of the Observatory Jordi Guixé. The main objectives of the Observatory are to promote interdisciplinary research and academic activities related to the construction of public memory, contribute to the analysis and management of the politics of memory, and influence in the right of citizens to use and interpret the memorial heritage. To achieve them, the Observatory organises its first international colloquium, entitled “Memory and power. A transnational perspective”, which takes place from 6 to 8 May at the Aula Magna of the Historic Building of the University of Barcelona.

The first colloquium organised by the European Observatory on Memories coincides with the European commemoration of the surrender of Nazi troops on 8 May 1945 and the present debate on Europe’s conception. It gathers experts from all over Europe and Latin America and proposes a discussion on how the different powers —local, regional, national and supranational— managed the public memory, either establishing frameworks of coexistence and participation, or by establishing official images of the past intended to replace the various memories by an official memory on behalf of the equalization.

Today, Tuesday 6 May, the rector of UB, Dr Dídac Ramírez, and the director of Heritage, Museums and Archives of Barcelona City Council, Mr Josep Lluís Alay, open the colloquium at 6.30 p.m. Philosopher Josep Ramoreda pronounces the opening speech that analyses how to think about Europe in the 21st century.

The programme includes numerous lectures and three round table talks. Among 7 May participants, we highlight Ricard Vinyes, historian and director of the Research Group Memory and Society of UB, who speaks about Europe (9.30 a.m.), and Claudia Wasserman, historian from the Federal University of Rio Grande do Sul, who analyses the case of this Latin American country (10.15 a.m.). Later, two round table talks happen: “Challenges on the politics of memory in the 21st century, transnational models” (11.40 a.m.) and “Memorial otherness and debates in recent European conflicts” (3.30 p.m.). The participants in the former round table talk are Adrian Kerr, director of the Museum of Free Derry, who will remember the fight for civil rights in Northern Ireland, and Oksana Chelysheva, journalist and member of the Finnish-Russian Citizens’ Forum, who describes Ukraine crisis. George Mink, director of research at the National Center for Scientific Research (CNRS, Paris), closes the session with a speech on East-West memories and post-communism (6.30 p.m.).

The third and last round table talk entitled “Power and Memory in Europe. Projects and gaps in national and European memorial policies” takes place on Thursday 8 May at 11.40 a.m. Amor Masovic, member of Parliament of Bosnia-Herzegovina and chairman of the Committee on Missing Persons and the International Association of Genocide Schoolars, participates in the talk and describes the pioneering work on mass graves and memory in the Balkans Wars, in Bosnia and Sarajevo.

The European Observatory on Memories

The activity of the European Observatory on Memories goes further. “We are carrying out interviews all over Europe, we will create a collective book and a new website with documentation on the different European memories, and we will collaborate in other workshops and lectures in Oslo, Berlin and other cities”, affirms the director Jordi Guixé. The objective is to create a transnational analysis network on the processes of construction and management of public memory, analysing the creation and implementation of projects of different governments and their relationship to cultural production and the political situation.

Some prestigious institutions and research groups from Europe and America that have already joined the European Observatory on Memories are: the International Committee of Memorial Museums for Remembrance (IC MEMO); the Museum of Free Derry; the Maison d’Izieu Association; the Finnish-Russian Citizens’ Forum; the National Institute for the History of the Liberation Movement in Italy; the Topography of Terror Documentation Center; the Mauthausen Memorial; the Museum of Occupations; the Wewelsburg 1933-1945 Memorial Museum, and the Centre for Memory and Testimony Studies of Wilfrid Laurier University (Canada), among others. 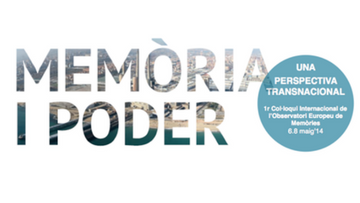