Petre Roman proposes a reflection about the democratic legitimacy of Europe

Barcelona – The current political and economic crisis should be taken as an opportunity to reinforce the democratic relations inside the European Union. This suggestion comes from Petre Roman, former Prime Minister of Romania (1989-1991), who delivered the talk “The fate of Europe” on June 29th at the University of Barcelona. Roman, who gained prominence as one of the leaders of the Romanian Revolution of 1989 that overturned the dictatorship of Nicolae Ceacescu, is a well-known liberal voice on European issues.

“The European spirit is optimistic”, he stated, “but it is hard to imagine a political Europe with such a hierarchical system and without democratic legitimacy”. For him, in a divided European Union marked by Brexit, the rise of right-wing Eurosceptical parties and the refugee crises, there is a need to ask “new questions for the already known answers”. According to Roman, classical liberal parties who constructed Europe as “an achievement of peace, development and sustainability” are now condemned by public opinion and need to use the current crisis to “make possible the politically impossible”. “The future cannot be duplicated from the experiences of the past”, he argued, stating that “Europe now has the obligation of reflection”.

With a degree in Physics, Petre Roman started his political career by being named Romania’s first Prime Minister after the fall of communism. Since then, he has acted as Deputy of the Democratic Party of Romania and currently holds a place in the Romanian Senate. His biography is also a testimony of the historical relations between Romania and Spain – his mother was a Spanish exile while his father was a prominent member of the Romanian Communist Party and a veteran of the Spanish Civil War. Petre Roman was invited to Barcelona by the “Obra Social La Caixa” and Club of Rome. 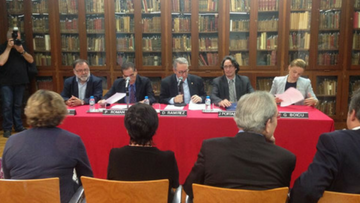