Barcelona, April 16, 2018. The European Observatory on Memories of the Solidarity Foundation of the University of Barcelona (EUROM) is organizing two activities around the protests of 1968 in Europe, which reach its 50th anniversary this year. Both activities will take place on Thursday, April 19, at the Historical Building of the University of Barcelona (Gran Via, 585), and their focus is the singularity of the protests and social movements in different European countries.

In the morning, the international seminar “1968: In Search of Freedom” will compare the political and historical contexts of social movements in the late 60s in Spain, Poland and Yugoslavia. The activity will take place from 10 a.m. to 1.30 noon, in the Staff Room (sala de professorat) of the Faculty of Philology of the UB (Josep Carner Building, 5th floor). The debate will proceed after the presentations of three historians who are taking part in the European project called In Search of Freedom: 1968-2018, carried out by the Beletrina publishing house (Slovenia), History Meeting House (Poland) and EUROM.

The colloquium will start with a conference by Mary Nash, head of the Research Group on Multiculturalism and Gender of the University of Barcelona. Nash will place the consequences of the “imaginary revolution” in May 1968 and the search for freedom under the Franco dictatorship. Professor Hrvoje Klasić, from the Faculty of the Faculty of Humanities and Social Sciences of the University of Zagreb, will show the case of student protests in the former Yugoslavia. Last, historian Piotr Osęka, from the Institute of Political Studies of the Polish Academy of Sciences, will talk about two revolts that took place in Poland in 1968.

In the afternoon, the focus will be placed on the labour movements and left-wing situation in southern Europe. Starting with En el laberinto. Las izquierdas del sur de Europa. 1968-1982 (Comares: 2018), a roundtable will analyse the journey of the left-wing political groups in different southern European countries during the 70s and 80s. The activity will take place in the room Ramón y Cajal of the UB (Historical Building, 1st floor) from 6 p.m. to 8.30 p.m. Participants in the debate are Mariona Petit, deputy of the Democratic Student Union of the Faculty of Sciences of the University of Barcelona during the year 1967/1968, and Joan Antoni Serret, filmmaker, Andreu Mayayo and Javier Tébar (editors).

The activities, coordinated by EUROM and Cipriano García Foundation (Worker Commissions of Catalonia) will close with the screening of the documentary Spagna ’68, by Helena Lumbreras (Italy, 1968), which will be followed by a debate. Secretly filmed in Madrid and Barcelona, the film pictures the political situation of Spain in 1968, through an analysis and the cases of witnesses of the anti-Francoist fight: labour commissions, student movements, priests and workers.

Interviews can be arranged according to the speakers’ availability. 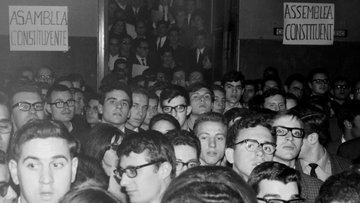 To arrange an interview, please contact the Communication Office of the European Observatory on Memories (Fernanda Zanuzzi, +34 685 821 203)