Franco 40/40: a multidisciplinary program by the European Observatory on Memories to review the 40 years gone by since Francico Franco’s death

Franco 40/40:  a multidisciplinary program by the European Observatory on Memories to review the 40 years gone by since Francico Franco’s death

November 6, 2015 – The University of Barcelona presented yesterday the project Franco 40/40: el franquisme en quarantena (Franco 40/40: Francoism under quarantine), a programme of activities that revise Franco’s forty-year dictatorship on the occasion of the 40th anniversary of his death. The series of activities is organised by the European Observatory on Memories (EUROM) of the Solidarity Foundation of the University of Barcelona, supported by the Barcelona City Council and the European Commission.

“The aim is to review the repressive regime that ruled our country for forty years as well as our 40-year democracy, through cinema, art and academic activities”, highlights Jordi Guixé, historian and director of EUROM.

The series includes around twenty academic and cultural activities, organised together with the Pompeu Fabra University; the Maritime Museum of Barcelona; the organization Archivists Without Borders; the Spanish film festival of Toulosse, Cinespaña; the network Eduxarxa; the Cipriano García Foundation; the Gernika Peace Museum; the Film Archive of Catalonia; the Universitat Rovira i Virgili, and the University of Perpignan Via Domitia.

Last October, the activity “Cronistes de carrer. Relats transeünts del franquisme” was developed in four different public spaces in the city of Barcelona where different historical events of the Civil War and Franco’s regime took place. Yesterday evening, at 7 p.m., the Aula Ramón y Cajal of the Historic Building of the University of Barcelona hosted the presentation of a video that illustrates the activity. Then, Jordi Guixé and university lecturers Núria Ricart and Manel Risques participated in a round-table talk on memory and participation.

The following activity, included in the programme “Women and memory”, is a symposium centred on women’s oppression, particularly gypsy women. It takes place on Friday 6 November, at 11 a.m. at the Faculty of Library and Information Science of the University of Barcelona. The symposium is part of a collaboration agreement that EUROM signed with the Federation of Gypsy Associations of Catalonia (FAGiC) and the association of Austrian gypsy women IG Kultur.

Women and Franco repression, as well as participatory processes to reconstruct collective memory, are the main topic of the activity “Bus Memòria” (Memory bus), a route to remember the eleven women who were imprisoned in the former Presó de les Corts and shot death in the Camp de la Bota. Maria Salvo together with other members of the Catalan Association of Former Political Prisoners participate in the activity, which takes place on 12 November.

On the afternoon of 12 November, Luis Farinha, director of the Museu do Aljube, a museum that was recently opened in Lisboa, pronounces a lecture that reviews the relationship that the Spanish dictatorship had with other European dictatorial regimes. After the speech, Ricard Vinyes, professor of Contemporary History at the University of Barcelona, and Francisco Ferrándiz, expert of the Spanish National Research Council (CSIC), participate in “Fosses, panteons i mausoleus. De les cunetes al Valle de los Caídos” (Graves, vaults and mausoleums. From ditches to the Valley of the Fallen), a discussion moderated by the writer Ignasi Riera.

On 20 November, activities take place at several locations: the Universitat Rovira i Virgili, the Sorbonne, the headquarters of the union Comissions Obreres and the Maritime Museum of Barcelona, where the organization Archivists Without Borders opens the 7th Symposium “Arxius, drets humans i democràcia. Rèmores, avenços i necessitats de futur dels arxius en democràcia” (Archives, human rights and democracy. Hindrance, progress and future needs of archives in democracy).

The lecture series on Franco’s death is closed on 23 November with the debate “Canvis i continuïtats en el sistema científic espanyol des de la transició” (Changes and continuities in the Spanish scientific system since the transition), presented by Albert Preses, professor at the Pompeu Fabra University. Activities are extended until April 2016. The project is closed by the exhibition “El franquisme en quarantena” (Franco’s dictatorship in quarantine), which inaugurates the new facilities of the Maritime Museum of Barcelona. The exhibition includes the presentation of the work Síndrome de Guernica, by Fernando Sánchez Castillo, a display made of metal scrap from Franco’s yacht Azor. 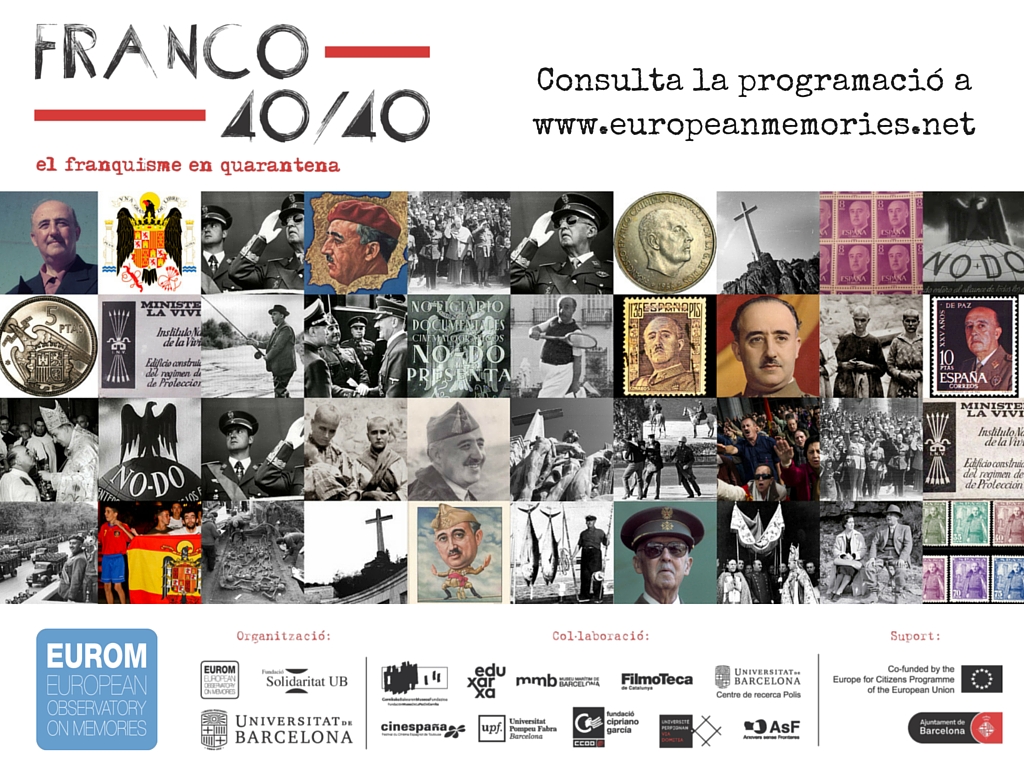