The Jean Monnet House (European Parliament), the European Observatory on Memories of the University of Barcelona (EUROM) and the European Commission in cooperation with the Education, Audiovisual and Culture Executive Agency (EACEA) jointly organize the meeting “Taking Stock of European memory policies”. The event will underline the importance of European remembrance for the future of Europe. It will gather over 50 projects selected in 2018 and 2019 under the Remembrance strand of the programme Europe for Citizens of the European Commission with the aim to improve the results and impact of the programme in the area of remembrance.  The debates will include a dialogue between Sarah Gensburger (Institut des Sciences Sociales et du Politique) and Markus Prutsch (European Parliament) to discuss the challenges of the European memories, and eight workshops where participants will examine topics like how to involve young people and less active citizens, how to best cooperate at the international level, communicate and make results sustainable.

On October 23, participants will be welcomed by Baudouin Baudru, Acting Head of the Representation of the European Commission in France; Isabelle Coustet, Head of the Office of the European Parliament in France, Teemu Tanner, Ambassador of Finland, Member state holding the presidency of the Council of the European Union, as well as by the organisers of the event. The session will conclude with the preview screening of the documentary film “1948-2018: réveil de la Guerre froide”, introduced by its director, André Bossuroy (MEDIEL asbl).

On October 24,  attendees will gather at the House Jean Monnet in Bazoches-sur-Guyonne for a day focused on a series of workshops and debates. The opening session will consist of a dialogue on the challenges of the public policies of memory in Europe with Sarah Gensburger, laureate researcher of the CNRS for the project Building an Interdisciplinary Science of Memory, and Markus Prutsch, principal investigator and administrator for Culture and Education Policies at the European Parliament. Further, Gilles Pelayo, Head of Europe for Citizens programme at the Education, Audiovisual and Culture Agency (EACEA), will present some guidelines for implementing projects supported by the programme, followed by questions and answers.

After a short break, the assistants will be organized in four workshops to share practical experiences and to address the challenges of their projects on issues of youth participation, cultural heritage, critical judgment, and citizenry. The second workshops’ sessions will start after lunch and will be dedicated to a discussion of the European dimension of remembrance action at the grassroots level, communication tools, citizens’ engagement, and projects’ sustainability.  The concluding remarks will be presented at 4:30 pm and will be followed by a visit to the Jean Monnet House.

A public event on the education of European memories will be held at 5,30 pm, in the framework of the cycle Conversations sur l’Europe commemorating the 40th anniversary of Jean Monnet’s death. The roundtable will include the participation of Kaja Sirok, director of the National History Museum of Slovenia, Antoine Arjakovsky, of the Collège des Bernardins, and Andreas Holtberget, project coordinator of Euroclio. The event will close with the performance “At Summer’s’ end”, by Smashing Times International Centre for the Arts and Human Rights. 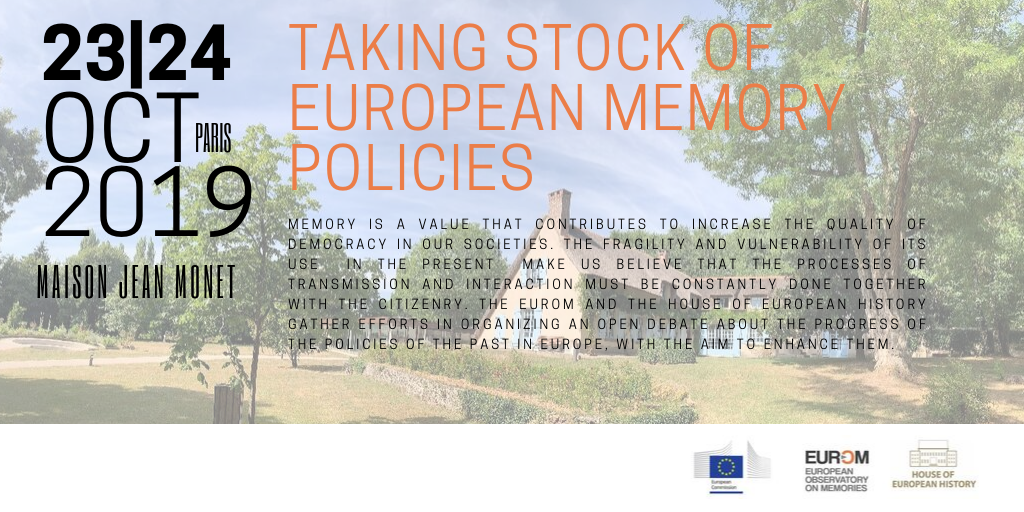