From July 4-9, ICOM’s general conference gathered more than 3,000 experts and museum professionals of its 31 committees around the issue of “Museums and Cultural Landscapes”. The meeting of the International Committee of Memorial Museums in Remembrance of the Victims of Public Crimes (ICMEMO) focused on worldwide experiences on memorial heritage, landscapes of war and dark tourism. On July 6th, ICMEMO’s meeting attendees gathered at Casa della Memoria for the last session “Reproducibility of Memorial Heritage, challenges and debates”, organized by EUROM and Istituto Nazionale per la Storia del Movimento di Liberazione in Italia (INSMLI).

During the symposium, Jordi Guixé encouraged new methods to develop memory politics based on fostering and defending citizen participation and new ways of transmitting memories. Together with Marcello Flores, director of INSMLI, he introduced the final roundtable with an analysis of how current debates on memory issues in the European Union label public policies on memory as a reaction to the European project crisis. They concluded by raising some questions on identity. “Identity remains an important facet of memory”, argued Flores, “and historians should take care to be ‘traitors of identity’, to not have loyalty to a specific identity in order to search for plural truths.”

Kateryna Chuyeva presented the project of Maidan Museum, a social initiative transformed from an NGO to a state institution. Founded in 2015, it aims to remember the victims of the wave of demonstrations for a closer European integration that began in Ukraine on the night of November 21, 2013, culminating in the revolution of February 2014.

Carla Prat Perxachs, of Museo Memoria y Tolerancia (Mexico) discussed the creation and interpretation of significance, or finding meaning in objects.  She explained how museums assume a certain responsibility for the objects they present. “Objects can help offer authenticity”, she said, “but museums should take caution because objects are always socially-possessed”.

The new exhibit designed for the Büchenwald museum was presented by architect Philip Norman Peterson, of Holzer/Kobler studio (Zurich).  The space keeps the original building volume, but was shifted horizontally in order to divide the exhibition into two distinct spaces.

Erik Somers, of NIOD Institute for War, Holocaust and Genocide Studies (Amsterdam), discussed how the culture of memories of the Holocaust and persecution of Jews has developed in the Netherlands through the history of the site of Westerbork.

Kornelis Spaans, of The Gaon Jewish State Museum in Vilnius (Lithuania) explained a project to establish a genuine Holocaust museum in the historic center of the city. The new museum will be built in the former Jewish ghetto, taking the place of the current museum which is in poor condition.

Simon Levis Sullam, Professor at the University of Venice, and Ilaria Porciani, Professor at the University of Bologna, presented some issues about the memory of Jews in Italy, from the Venice ghetto to persecution in the Second World War. According to Levis Sullam, while Italy was often represented as a paradise for Jews, the ghetto shows that this was not the case as it has become a metaphor for a space of segregation, isolation, and demarcation. Porciani focused on the memory of forced migration and the new trend of museums to focus on victimhood. She suggests that we should compare Italian museums dealing with migration across borders with the German and French examples in order to “unfreeze time, and allow the museums to exist as catalysts that trigger oral memorial projects and encourage the remembrance of memory”.

Paolo Pezzino, Professor at University of Pisa, and Stefanie Endlich, of the Universität der Künste (Berlin) discussed memory, witnesses and the process of memorialisation. Pezzino spoke on the civilian massacres of Sant’Anna di Stazzema and Marzabotto, committed by Nazi Germany, in order to address how institutional politics of memory, collective memory of communities, and eyewitnesses can meet in dialogue. Endlich argued that the role of witnesses ought to be more precise.  She also stressed the difference between memorial museums and monuments, the latter often self-financed and involving survivors to a greater degree in West Germany, while East Germany established large state memorials in order to highlight the anti-Fascist basis of the new state. “The work of witnesses in memorial museums is of utmost importance”, she said, and “while the opportunity to speak to witnesses is fading, archives and collections have been created to preserve these narrations in an accessible way.”

The morning was dedicated to Ex-Campo Fossoli, created as a prisoner-of-war camp for English soldiers from the North African campaign. After the Armistice in September 1943, it was divided in two, one for northern Italian Jews and the other for political opponents. An SS visit in February 1944 resulted in Nazi takeover of the Jewish part of the camp. From 1948-1952 the camp was used as a community of orphans (Nomadelfia), and until the 1970s by refugees of World War II. In 1984, the Italian government gave the camp to the city of Fossoli and works began in 2001. Primo Levi was in this transit camp from January to February of 1944, before he was transferred to Auschwitz.

The visit to Museo del Deportato in Carpi was guided by architect Alberico di Belgiojoso, of BBPR Architects Studio (Banfi, Belgiojoso, Peressutti, Rogers) which in 1973 designed the museum in the historical building of Palazzo dei Pio. Belgiojoso explained that his father was sent to Fossoli camp, and later Mauthausen and survived. Considered a unique project, it is fruit of the civil commitment of artists who also witnessed the events they represented. The walls of the building preserve graffiti of Pablo Picasso, Fernand Léger, Corrado Cagli, Renato Guttusi and Emilio Longoni, who explain in their own way the horror of deportation.  The outside space contains the names of deportation camps in the Nazi-occupied territory. Inside, quotes from letters of deportees to family members carved into the walls “let the people speak” and creates a clean and simple style that evokes empathy from the viewer. Another room is dedicated to the 14,310 Italian Jews (those known to Italy in 1960) whose names are carved into the walls as well and whose multitude translates the magnitude of the situation.

On Friday, the group traveled to Torino for a day tour of the city. Guided by director Guido Vaglio, the group visited the Museo Diffuso, Library and Exhibit. On permanent display is “Turin 1938-1948. From the Racial Laws to the Constitution” which depicts life during World War II, Germany’s occupation of Italy, the antifascist Resistance, and Italy in the post-war period. Through interactive, multimedia technology, the group viewed video footage of each aforementioned period projected on the museum walls, listened to recorded interviews with eyewitnesses or involved parties, and visited an air raid shelter below the museum. 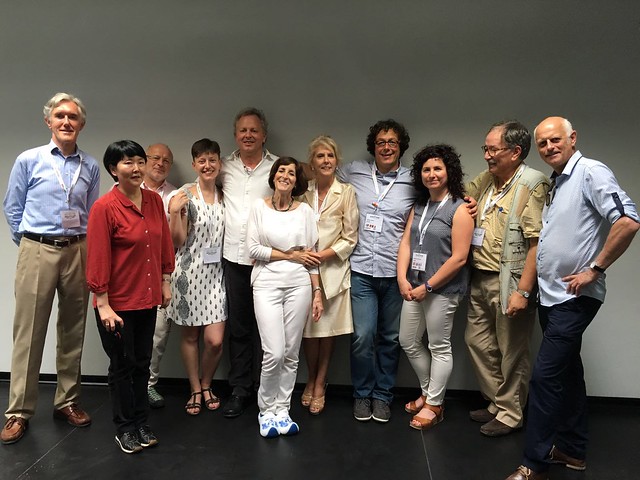 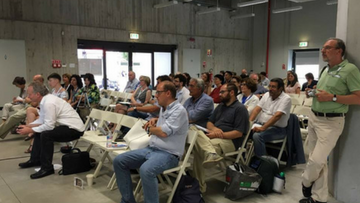