The European Observatory on Memories (EUROM), the multidiscipline and transnational network of public memory policies driven by the University of Barcelona’s Solidarity Foundation, signed two collaboration agreements in June: with the Institute for the Studies on Human Rights of Columbia University, and the government of Navarra. Columbia University is the first North American institution to join this European project, aimed to promote interdisciplinary research and academic and cultural activities related to the construction of democratic memory. The Government of Navarra is the first governmental Spanish institution to join.

In this agreement with Columbia University the student exchange stands out, in the Alliance for Historical Dialogue and Responsibility (AHDA) –a training project about the impact of conflict memory from recent past in current societies. AHDA gathers annually different people from politics, social affairs and cultural affairs such as academics, representatives of civil society, journalists, educators, and artists. From this year on, EUROM will take part in the selection process of a candidate to join the program, and will give a financial aid of 2.000,00 euros. Moreover, this summer the European Observatory on Memories hosts a trainee student from Columbia University in June and July.

Regarding the agreement with the Government of Navarra, the management analysis of the public memory policies stands out, nationally and transnationally, and also the promotion of the research through the joint action development. The agreement with Navarra highlights the objective of analysing, creating and promotion public memory policies which take into account initiatives from other European countries and that use this experience in the development of the established policies in the Floral Law 33/2013 for the recognition and moral repair of murdered citizens and victims from Navarra due the repression after the military coup in 1936.

Created in 2012, with the support from the European Commission, the European Observatory on Memories works for the recognition of memory diversity. In this sense, and through the promotion of transdisciplinary, transverse and transnational projects, EUROM aims to identify and analyse the diversity of the memory process in Europe and other continents; to promote debate for the creation of representative public policies and to contribute to the analysis and management; promote socialization of memory initiatives and real connections among institutions, professionals and researchers. At the moment the network has 38 institutions and research groups in Europe and America. Apart from the Government of Navarra and Columbia University, this year EUROM signed agreements with the Spanish Social and Democratic Memory Association (AMESDE), the Riga Ghetto and Latvian Holocaust Museum, and the Institute of Leuven International and European Studies (LINES). 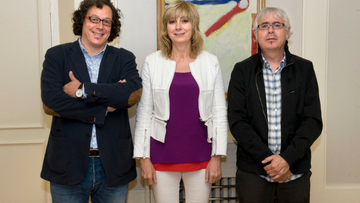