On May 31 and June 1 Barcelona will hold the international conference “European Citizenship in Challenging Times. Remember, Engage, Debate!”, organized by the European Commission with the collaboration of the European Observatory on Memories of the Solidarity Foundation of the University of Barcelona and the City Council of Barcelona. There will be around 200 representatives of European entities of the citizenship and remembrance fields with the aim of debating and putting in common some of the current European topics, with special emphasis on citizens’ participation, civil rights and public memory policies.

The participants will be welcomed on Monday May 30 at the Paranimph of the University of Barcelona with the concert “Farem la revolució, i la tornarem a fer”, by Lídia Pujol, who will also have the special participation of Manel Camp playing “Rèquiem per a Walter Benjamin”. The performance will remember the thousands of refugees of the wars in the 20th Century and will pay homage to the fights and all the people who are currently getting to Europe seeking refuge. The Vice-Rector for Administration and Organization of the University of Barcelona, Carme Panchón, will welcome the attendants.

The conference will be presented on Tuesday May 31 at 9.30 h, in the Paranymph of the University of Barcelona. Apart from the vice-Rector Carme Panchón, the act will count with the presence of the general Director of Justice and Consumers of the European Commission, Francisco Fonseca Morillo. The journalist Adam Michnik, Editor in chief and Founder of the Polish newspaper Gazeta Wyborcza will be in charge of the opening conference.

Over the session of May 31, academics, professionals and representatives for associations and civil society in the European institutions will debate on three boards open to the attendants’ participation. Some European identity topics will be exposed, with special emphasis on people’s rights, civil participation and democratic commitment.

Wednesday June 1 will be dedicated to European conflict memories. The conference will be transferred to the El Born Centre Cultural i Memòria, which will become the headquarters of the 6th European Remembrance Networking Meeting. This session will gather around 60 representatives of European remembrance entities and, for the first time, it will be open to local entities’ participation too. The debates will focus on clear but not always explicit relations, between remembrance, citizenship and solidarity, starting from the current emergency situation lived by the refugees at the European shores and frontiers.

The meeting will start at 9.30 h, by the Director of the European Observatory on Memories, the historian Jordi Guixé, accompanied by the Commissioner of Remembrance Programs of the City Council of Barcelona, Ricard Vinyes, and the representative of the European Commission, Pavel Tychtl.

The philologist Andreas Huyssen, from the University of Columbia, will give the main conference highlighting the construction processes of collective memory in international political conflicts. Considered to be a distinguished author in the study of this field, Huyssen dealt with cases such as Germany’s and Argentina’s in several works such as Present Pasts: Urban Palimpsests and the Politics of Memory. The conference will follow with a series of dialogues about memory conflicts in Europe, with special attention on democratic participation and solidarity construction from inclusive memories.

There will be the participation of –among other people- the Director of the Middle East Studies Centre and lecturer of Middle East and Islamic Politics at the University of Denver, Nader Hashemi; the philosopher Siobhan Kattago, from the University of Tartu (Estonia), and the historian Bruno Groppo, mayor in Working class movement history. The historian and novelist Regine Robin, author of works such as La mémorie saturée and Cybermigrances: Traversées fugitives will give the closing conference on the current state of the European memories. 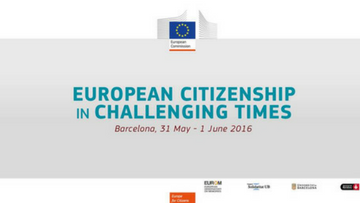