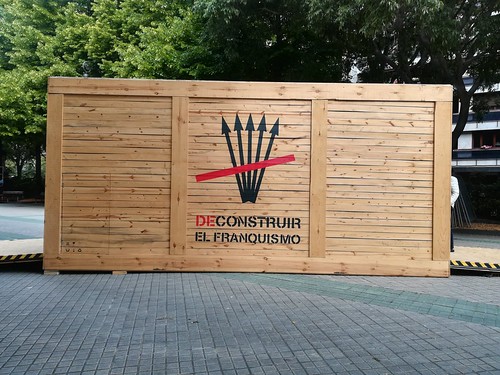 The European Observatory of Memories (EUROM) and the Public Art and Memory project of the University of Barcelona promote an exhibition in collaboration with the Government of Navarra displaying more than 300 Francoist symbols and honorable mentions that have been removed from public space in the framework of the program of withdrawal of Francoist symbology from the General Directorate of Peace, Coexistence and Human Rights.

The exhibition was inaugurated on June 13, 2019, by the acting Counselour of Citizen and Institutional Relations, Ana Ollo. It and can be visited until June 21, from 9 a.m. to 9 a.m., at the Paseo de Sarasate in Pamplona. The curators of the exhibition, Jordi Guixé, director of the EUROM, and Nuria Ricart, from the Public Art and Memory project of the University of Barcelona, attended the opening ceremony.

Among the materials exhibited in the exhibition, there are the originals of some of the more than 300 Francoist symbols and honorable mentions that have been removed from the public space since 2016. The installation, located inside a wooden container, is complemented by a series of photographs that illustrate the process of withdrawal of the laureate located on the facade of the Provincial Council of Navarra. In addition, an interactive map allows you to geolocate and learn more about the removed symbology.

During the inauguration, Counselor Ollo stressed that within the public policies of memory of the Government of Navarre, “the democratization of public space has always been one of the priority lines of work.” A democratic society, he added, “can not maintain in its public space symbols that extol violence. All these symbols are an affront to the victims and totally inadmissible for anyone who condemns violence. “

“When we speak of work in values, of actions that seek not only the withdrawal of a symbol but also the awareness of society about what an image or a name represents for our democracy and, especially, for the victims of violence unleashed after the military coup of 1936, it is crucial to seek collaboration and involvement of all. That has always been our position, seeking the collaboration and involvement of both local entities as memorial associations and civil society as a whole with actions like this.

The counselor concluded by thanking the work of the European Observatory of Memories and the entire Directorate of Peace, Coexistence and Human Rights, as well as the Navarra Federation of Municipalities and Councils and all the municipalities and councils that have collaborated “so that the streets and squares of Navarre are today democratic spaces “.

In 2016 the Government of Navarre launched the first Francoist symbology census of Navarre, which included 224 laureates and housing plates and 78 honorable mentions, names of streets or designations. Almost 160 more symbols have been detected, which has raised the total figure to approximately 460. Of all of them, more than 300 have been removed and almost 70 are in the process of being withdrawn. 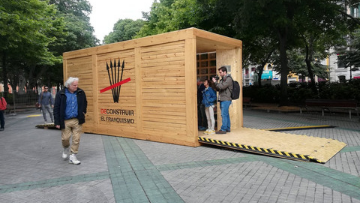