The history of Cerbère, a small town at the Côte Vermeille has been always subjected to their status as a border area. On 1864, France and Spain signed an agreement to connect their railway lines through the Belitres mountain pass, natural path of communication among Cerbère and the adjacent Spanish town Portbou. This decision entailed the building of a railway station in each town connected through an international tunnel opened in 1876.

Situated on each border, both towns became the main objectives of the Republican exile towards France. Upon the final defeat of the Republican army during the Spanish Civil War once the Franco army occupied Barcelona on January 16th, 1939, almost half million people run away towards the French border, the massive exile known as the la Retirada (the Retreat). 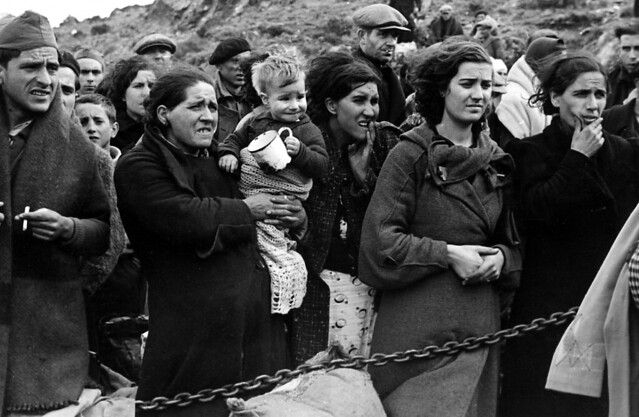 More than 100,000 persons run away from the Spanish fascism through the mountain pass of Belitres at the end of January and mid of February 1939. Most of them were imprisoned in different internment camps built by the French Government along the Roussillon coast (Argelèrs-Sur-Mer, Saint-Cyprien or Le Barcarès), which until that moment  were only huge deserted beach extensions limited by wire fences and controlled by the French army, where the exiles were stacked up without any shelter against the weather. The mortality rate within the camps rocketed due to the lack of infrastructures, the unhealthy water and the lack of food, in addition to the poor health condition of the Republicans. Part of those Spanish refugees spurred on the terrible conditions of the camps, accepted to be deported back to Spain, where they suffered the oppression or discrimination, while others could take up exile in America. Those staying in Europe started to suffer a new war against fascism, the Second World War.

There are several elements reminding those episodes.  At the railway station, a billiard-marker honors the Spanish exiled, who would become the “first victims of the Second World War” after three years of fighting against Franco’s regime. In the border area of the mountain pass of Belitres, between Portbou and Cerbère, two commemorative elements signal the symbolic importance of that place. On one hand, a monolith pays tribute to the troops that definitely occupied the last French border posts on February 10th, 1939. The monument was built by Francoist authorities a few months after the final victory against the Republican army and is currently explained through a contextual signal. A few meters away there is the Memorial del Exilio del Paso de Belitres (Memorial to the Exile through the Belitres pass).  Made up of four panels standing over a platform built above a small hill, the monument shows a series of pictures by French-Colombian painter Manuel Moros illustrating informative texts.  Images were taken precisely at the same border post during the key days of the Republican exile and perfectly show the scale of that humanitarian catastrophe. Both elements – the signal and the Memorial – were built in 2009 on the request of Memorial Democràtic de Catalunya.