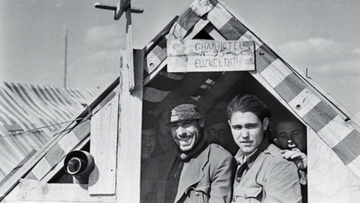 Franco’s army supporting the coup d’état steadily advanced, causing a constant exile of Republicans running away both from the bombings and the violent repression carried out by the army in the areas they were gradually occupying.  The defeat of Barcelona, taking place on January 26th, 1939, was the main trigger to the massive exile towards the French border, known as la Retirada (the Retreat).

In winter and totally deserted, more than 450,000 Republicans run to the different open border posts opened by the French Government from January 2th. This massive migratory wave was totally unprecedented for that country, deeply affected by the economic and social crisis. Certain political movements used this situation to boost social alarm and xenophobia towards the refugees, who were considered subversive and dangerous. As such, Edouard Daladier’s Government passed some decrees by which the “undesirable foreigners” could be confined by the administration in permanent surveillance centers from the end of 1938.  These acts provided the necessary legal cover to firstly imprison around 350,000 Republican and Spanish refugees throughout the different concentration camps built against the clock in France and, subsequently, to lock up anyone, foreigner or not, representing a threat to public policy and national security.

The Roussillon coastal strip, only a few kilometers away from the border, was the center of the main internment camps such as Argelès-Sur-Mer, Saint Cyprien and Le Barcarès. In the beginning, they were only huge deserted beach extensions, limited and controlled by the French army, where thousands of refugees were imprisoned without any shelter at all to protect them against the weather. The mortality rate within the camps rocketed due to the lack of infrastructures, the unhealthy water and the lack of food, in addition to the overcrowding related conditions and the poor health condition of the Republicans that arrived at the camps.

Le Barcarès site was opened on January 18th, 1939, and it was the third internment camp built at the Roussillon coast. It was made up of 300 shanties built by the prisoners themselves (around 1,300 persons), as it was usual in the region. It was firstly designed to take in around 50,000 persons; however, around 70,000 persons lived there in peak periods.

When France engaged to the Second World War, the camp started to be used for military training purposes of the Marching Regiment of Foreign Volunteers, created to temporary integrate into the army the refugees that arrived in France, as well as to reduce the population in the camps. On November 1942, Le Barcarès was finally closed.

Nowadays, there is a monument honoring the memory of more than 10,000 persons standing a few meters away from the old camp, at the known “esplanade of the foreign volunteers”, who fought for the freedom of France and Europe against Fascism along with the Marching Regiment of Foreign Volunteers.

Esplanade of the foreign volunteers