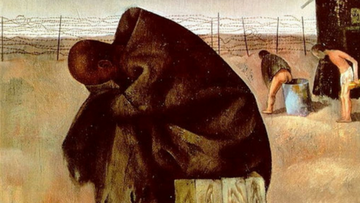 [Picture: In the camp. 1940 painting by Felix Nussbaum, based on his imprisonment in the Saint-Cyprien camp.]

On January 26th, 1939, Barcelona was finally defeated by the Franco’s army, this practically meant the final defeat of the Republican army in the Spanish Civil War, as well as the massive exile towards the French border known as la Retirada (the Retreat).  In winter and completely deserted, more than 450,000 Republicans run away towards the different French border posts set up by the French Government from January 28th. This huge migratory wave was totally unprecedented in France, suffering a deep economic and social crisis. Some political movements used this situation to boost the social alarm and xenophobia towards these refugees labeled as subversive and dangerous.

As a good example, Edouard Daladier’s Government passed some decrees by which the “undesirable foreigners” could be confined by the administration in permanent surveillance centers from the end of 1938. These acts provided the necessary legal cover to imprison around 350,000 Republican and Spanish refugees throughout the different concentration camps built against the clock by the French Government.

The Rosellón coastal strip, only a few kilometers away from the border, was the center of some of the main internment camps, such as the Argelès-Sur-Mer, Saint Cyprien and Le Barcarès. At first, they were only huge deserted beach extensions, limited and controlled by the French army where thousands of refugees were imprisoned without any shelter at all to protect them from the weather. The mortality rate within the camps rocketed due to the lack of infrastructures, the unhealthy water and the lack of food, in addition to the overcrowding related conditions and the poor health condition of the Republicans.

The Saint-Cyprien camp was opened on February 8th, 1939, a few days after the opening of the adjacent Argelès-Sur-Mer camp, and its aim was to lock up and control the avalanche of Republican exiles crossing the French border. At first, there were only tents, but it ended up with 13 blocks of 300 x 500 meters each containing 28 wood barracks. Each barrack had a size between 75 and 125 m2, and inside each of them, there could live an average of 75 men. The Saint-Cyprien camp gave shelter to 90,000 persons at its peak congestion moment in March 1939. 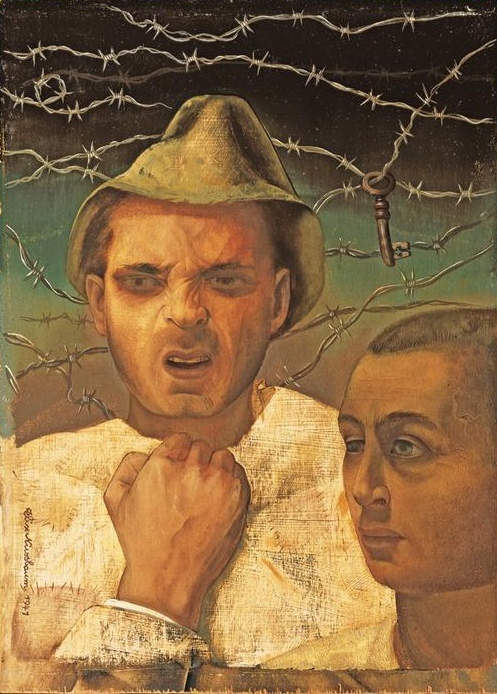 When France engaged to the Second World War, several political refugees, most of them Jewish, running away from the Third Reich arrived in France. They joined the Spanish contingent already inside the camps, particularly from May 1940 when the Western front was defeated. The Saint-Cyprien camp was opened until November 1942 when it was closed due to “health reasons” and the internees were moved to different camps, such as Rivesaltes where the Spanish refugees were sent or the Gurs camp where the Jewish exiles were moved.

Nowadays, there are a few monuments honoring part of those dramatic historic episodes in Saint-Cyprien. For example, it is possible to visit the monument to Lluís Companys (President of the Catalan Government assassinated by the Franco regime) and all the Catalans who died fighting as volunteers in the French army, or the Memorial for the former internment camp or the ossuary plaque at the Saint-Cyprien cemetery, where the names of some Republicans who died on the battlefield are remembered.

A collection of pictures of the camp de Saint Cyprien is available at the United States Holocaust Memorial Museum.