The resurgence of identity-based nationalisms crosses most of the countries of Europe, mobilizing and re-visiting national stories and memories linked to current issues. They value stories that reinterpret or reject troubled periods from their past, which, depending on national contexts, combine different dimensions (post-colonial, post-communism, post-dictatorship, post-war…). At the same time, alternative dynamics and memory initiatives referring to these troubled pasts are trying to broaden the public cultures of historical memory by allowing neglected or forgotten memories to emerge.

The seminar “Tracing troubled pasts in Europe and making memories” raises shared questions on these troubled pasts based on multidisciplinary research.

During four sessions, the public uses of memory that make these pasts different will be examined through different narrative devices (memorials, museums, commemorations, repairs) and public initiatives that mark their topical relevance. The ambition of the seminar aims at one hand to decentralize research perspectives towards transnational dimensions of redefining public cultures of memory, and on the other hand to question the tools (educational, digital, surveys…) which would equip the critical skills of public memory players.¡

Organized by the Centre Max Weber-CNRS in collaboration with the EUROM.

February 12
The memory laws in Europe. Models and their controversies
Sébastien Ledoux and Jordi Guixé 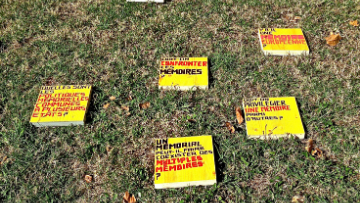