Solidarity Foundation: 20 years of commitment to peace and human rights

The Balkan wars, the conflict in Colombia and the crisis of refugees from different countries (Syria, Iraq, Palestine, Sudan and others) are the three themes that will be addressed by the participants in 45 minutes round tables. These international issues have been largely addressed by the Foundation during the last 20 years. Among others, the event will count with speeches by Manel Vila, General Director of Cooperation for Development of Catalonia’s Government; Pere Vilanova, Professor of Political Science at the University of Barcelona; Dolors Camats, in charge of the reconstruction project of the University of Pristina (Kosovo); Manuel Ramiro, director of the Institute of Intercultural Studies of the Pontificia Universidad Javeriana of Cali (Colombia) and David Bondia, professor of International Law at the University of Barcelona.

18:00     The Balkans’ Wars: what we thought that would never happen again in Europe.

18:30     Colòmbia, the eternal conflicts: the ones we thought would never be solved 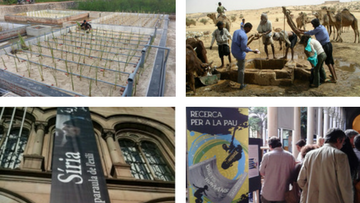