The Holocaust as a starting point (2020)

Cover picture: A group of children at the Lisbon train station in August 1944 after arriving from Barcelona. They had crossed the Pyrenees stealthily. Joel Sequerra (American Jewish Joint Distribution Committee) is accompanying them | Yad Vashem | Further information in the online exhibition “Barcelona Jewish Shelter” 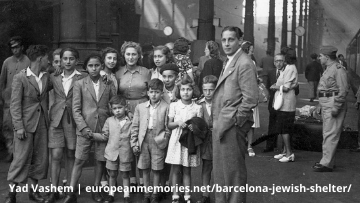