As an affiliated organization of Historical Dialogues, Justice, and Memory Network, the EUROM will take part in a roundtable about the project “Mapping Historical Dialogue”. The meeting will discuss how the international ad-hoc trials wind down is currently opening a new phase of evaluating the efficacy of institutionalized means of confronting the violent past.

As the international ad-hoc trials — often instigated in the immediate aftermath of, or during conflict — wind down, we enter a new phase of evaluating the efficacy of these and other institutionalized means of confronting the violent past. We can now begin to assess their impact on the societies from which the perpetrators and/or victims emerged. And what about societies that maintain official amnesia or actively repress the memory of violence with regard to historical injustices? Is there a right timing for addressing the violent past? Should and could historians and historical dialogue play a more instrumental role in these processes? The 2016 conference aims to explore the above mentioned topics and welcomes papers or panel proposals. 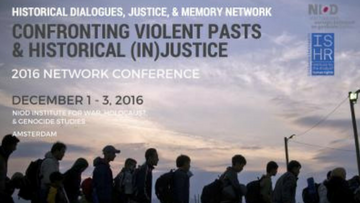