Petre Roman: The fate of Europe

The former prime minister of Romania (1989-1991) rose to prominence during the Romanian Revolution of 1989, when he was among the crowd occupying the National Television building, and broadcasting messages expressing revolutionary triumph. He became provisional prime minister after the overthrow of the Communist regime, and was confirmed in office in June 1990, three months after the country’s first free election in 53 years. Petre Roman is currently a member of the National Liberal Party and member of the Club de Madrid.

Born in Bucharest, Petre Roman is the son of Valter Roman, a veteran of the Spanish Civil War and prominent member of the Romanian Communist Party, and Hortensia Vallejo, who was exiled from Spain and would become director of the Spanish session of Radio Romania International. 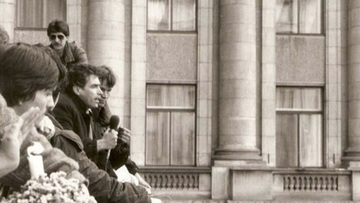