The works from this program were denounced by Nazism and Stalinism as “degenerate” which are largely based on cabaret and jazz that is characterizing one of the great aesthetic musical genre of the interwar period. It gives ample room to an iconic composer of the period: Hanns Eisler, who remains totally absent from concert life today, and even less recorded. He created the concept of “combat music” to oppose Nazism.

The program also includes composers who have criticized human rights abuses in their works during the Cold War as well as in apartheid American society, as shown by O King the Italian Luciano Berio.

Finally, a third part of this concert is constituted by the research on the elimination of Jewish composers by Nazism and on the memory of the deportation and the Shoah, whether by the Czech Emil Burian, or mentioned by two composers from nowadays who did not experience the events, but attentive to their transmission: the Israeli Lior Navok and the French Amaury du Closel.

Maria Ostroukhova is a Russian mezzo-soprano who began her music journey as a pianist and harpsichordist. In 2012 she enrolled into the vocal faculty of the Royal College of Music and since her graduation with distinction in 2015, Maria has been working with a number of exceptional musicians such as: Federico Sardelli, Vladimir Yurovsky, Massimo Zanetti, Laurence Cummings, Christopher Glynn,Vasili Petrenko, Barry Douglas, Jeremy Silver, Amaury du Closel and etc. She enjoys a vibrant operatic career having such roles in her repertoire as: Alcina (Orlando Furioso), Ottavia (Il Coronazionedi Poppea), Rinaldo (Rinaldo), Bradamante (Alcina), Isabella (L’Italiana in Algeri) and many others. In 2015 Maria won the second prize at the London Handel Competition, in 2016 she won the Special Award Competizione dell’ Opera (Bolshoi Theatre, Moscow) and in 2019 – Carlo Maria Giulini Award at the X International Stanisław Moniuszko Competition.

Founded in 2003 by conductor Amaury du Closel, the Forum Voix Étouffées is one of the main organizations for the research and spreading of works by composers banned by European totalitarisms and especially Nazism. The Forum considers music to be an effective tool for transmitting to various audiences the history and consequences of totalitarian regimes. Its scope of intervention is open to related topics, especially in the framework of international conferences it organizes with the participation of historians, political scientists, philosophers and musicologists. Based in Strasbourg, the Forum Voix Étouffées is a recognized partner of many remembrance and music organizations in Europe. It also created an instrumental ensemble, Les Métamorphoses (previously Ensemble Voix Étouffées), which has given numerous concerts throughout Europe since its foundation.

The European Stifled Voices Festival, founded by the maestro Amaury du Closel, was founded in 2003 and the goal of this organisation is to remember, rediscover and promote the music of composers who were victims of European totalitarisms, and thus keeping alive the memory of the Shoah history and the cultural consequences of authoritarian regimes in Europe during the Twentieth Century. Based in Strasbourg (France) and organized every two year, the festival originally focused on Nazism, and extended from 2011 onward to all forms of authoritarian regimes such as Stalinism and the various forms of fascism. Its various activities include concerts, international conferences, pedagogical workshops, publications and CD recordings.
Since 2008, the Festival has taken a broad European dimension with the support of the program Europe for Citizens of the European Union. Over the last decade, it has been present in more than 15 member states of the EU, federating a network of more than 30 partner organizations sharing the same artistic and memorial goals.
AMAURY DU CLOSEL
Vienna based French conductor and composer Amaury du Closel studied composition with MaxDeutsch and conducting with Alexandre Myrat. He appears regularly with numerous orchestras in Europe and Asia. He is currently Musical Director of Opéra Nomade, a nationwide opera touring company, and is also Artistic Director of the Silenced Voices Festival in Strasbourg. Amaury du Closel Published in 2005 a book about European composers victims of the Naziregime, which was awarded the French Prize of Critics for the best musical essay. Since 2003, he has been reviving plenty of works of these composers in the concert series Forum Voix Étouffées. He regularly records with die Nürnberger Symphoniker for Deutsche Grammophon and Sony,and collaborates also with Naxos and the English label KMI. 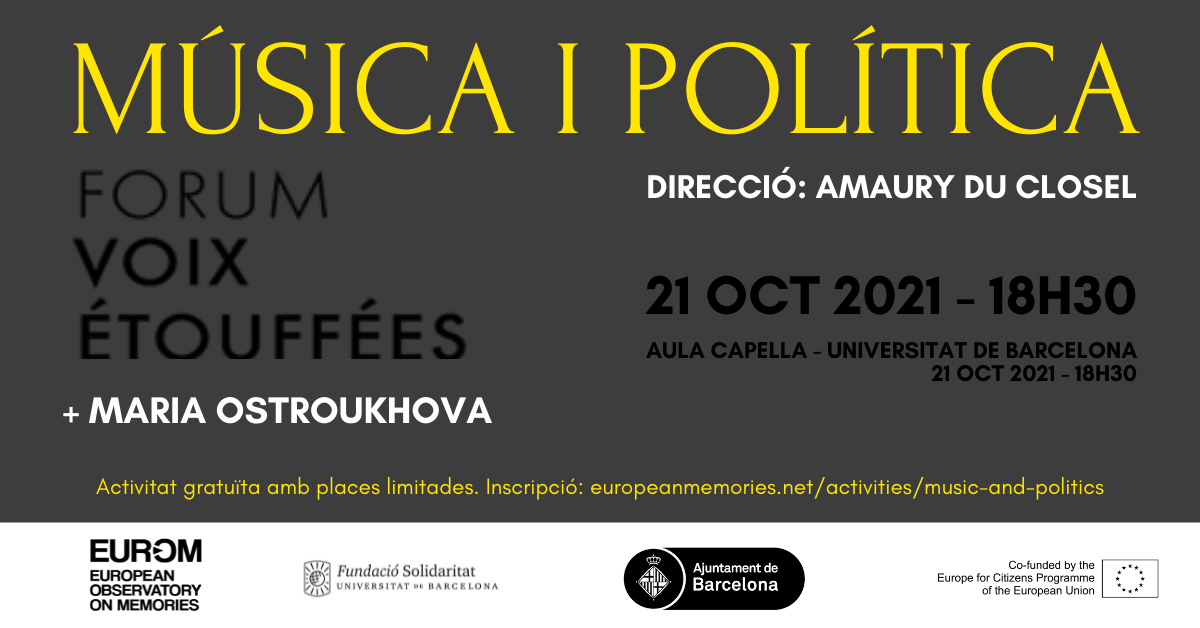