The debate will be held in Spanish
Live stream through our Youtube channel.

The table will take as a starting point the memorial book that relates the experience of the so-called “Unmemorial” of Madrid and the “Lar” sculpture by Fernando Sánchez Castillo to homage the almost three thousand people executed in post-war Madrid (1939- 1944), most of them in the vicinity of the Este or Almudena cemetery, the largest in the capital. Promoted in 2019 by the Manuela Carmena city council, the project was curtailed, and denatured by the current consistory chaired by Martínez Almeida, who under the pretext of his “resignification”, ordered the removal of the names of the monument and other no less important elements of the project.

Within the framework of public memory projects referred to cemeteries as “places of memory”, the participants will get into debate following a comparative perspective with other initiatives carried out in different territories, particularly in Barcelona and Catalonia. The aim is to identify problems and possible solutions, as well as reflect on the relationship between art and memory, or memorial projects in public space, particularly in funeral spaces.

The table will be introduced by Jordi Guixé, director of the EUROM, expert in policies of memory, and a professor at the faculty of Fine Arts of the University of Barcelona. The debate will be moderated by Professor Vanesa Garbero, from the University of Córdoba (Argentina), a specialist in policies and spaces of memory in prisons and detention centers during the Argentine dictatorship. In 2019, she enjoyed research stay in Spain that allowed her to know first-hand the case of the memorial monument in Madrid.

Tomás Montero Aparicio began his studies at the Complutense University of Madrid attracted by contemporary history until he joined the Administration of the Community of Madrid as a public employee. In 2005, his interest in the War in Spain and the incipient personal investigation of his grandfather shot next to the walls of the Eastern Cemetery, encouraged him to create and share a website, www.memoriaylibertad.org, giving rise to the group of relatives of victims of the Franco regime in Madrid.

Fernando Hernández Holgado is a professor in the Department of Modern History and Contemporary History at the Complutense University of Madrid. Since 2007 he has been the coordinator of the web portal Memory of the Les Corts women’s prison (www.presodelescorts.org) of the Association for Culture and Memory of Catalonia (ACMe). In 2018, it published, on behalf of the Madrid City Council, the list of people executed in the capital during the period 1939-1944.

Fernando Sánchez Castillo studied Fine Arts at the “Complutense University of Madrid” and philosophy in aesthetics at the “Autonomous University of Madrid. He received scholarships in Santander (Fundación Marcelino Botín Grant, 2000), Madrid (Caja Madrid Generation Scholarship, 2002), and Amsterdam (Rijksakademie 2005/06). In 1999 he took part in the Abracadabra exhibition at the Tate Modern in London, in 2001 he exhibited at the Deichtorhallen in Hamburg and in 2003 at the MoMA PS1 in New York. Sánchez Castillo was represented in 2004 with his work at the São Paulo Biennial in the Brazilian city of São Paulo. At the Stedelijk Museum, Schiedam had a retrospective of his work represented in 2006 and 2007 with the exhibition Each One His Own and was invited to participate in the Greatness exhibition at Sonsbeek 20081 2 in Arnhem, where he participated in the Lideres de la sculpture.

Ricard Conesa is a historian with a Master in Historical Culture and Communication and a Master in Historical Studies from the University of Barcelona, where he is carrying out his doctoral thesis on memory policies in public spaces in Barcelona. He was a project technician and memory spaces at the Memorial Democràtic and is currently a project manager at the European Observatory of Memories (EUROM).

Vanesa Garbero is a Ph.D. Social Scientific from the University of Buenos Aires, Magister in Sociology from the Center for Advanced Studies (CEA) of the National University of Córdoba (UNC), and postdoctoral fellow of the National Council for Scientific and Technical Research (CONICET). Her current research topic is the reception, uses, and resignifications of memory policies in the province of Córdoba. She is a Professor in the area of ​​Social Studies of Memory and Heritage at the Center for Advanced Studies, in the Faculty of Social Sciences of the National University of Córdoba and in the Faculty of Political Sciences and International Relations of the Catholic University of Córdoba. In addition, she works as coordinator of the CEA Memory Studies Program and is the editor-in-chief of the research journal Astrolabio, Nueva Época, belonging to the Center for Research and Studies on Culture and Society (CONICET and UNC). He has published articles on the social memory of State terrorism in the province of Córdoba in various national and international magazines.

Jordi Guixé is a Ph.D. historian, founder-director of the European Observatory on Memories (EUROM) of the University of Barcelona Solidarity’s Foundation, and associate professor in the Faculty of Fine Arts. He is also a chef and winemaker. Specialized in public policies of memory, he is best known for his researches on Franco’s repression of political exiles of the Spanish Civil War, World War II, and the Cold War, having organized and contributed to many publications on the topic 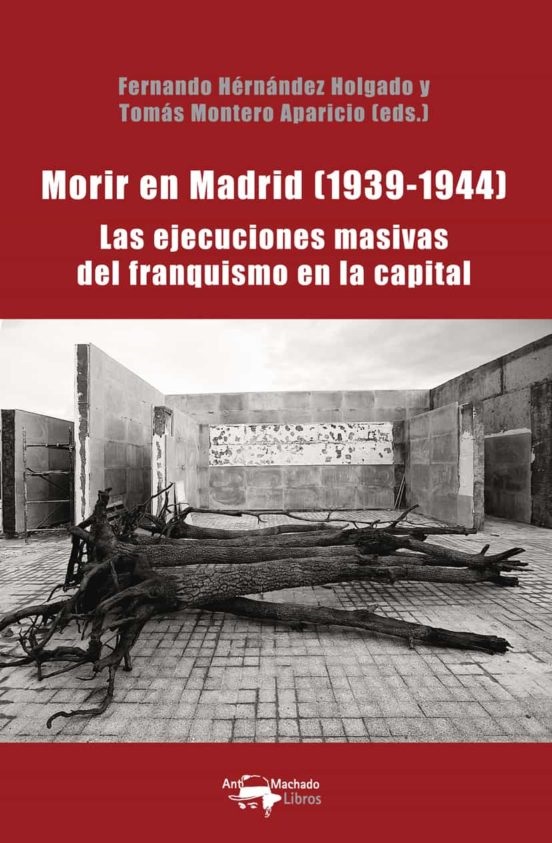 Morir en Madrid (Antonio Machado Libros, 2020) is presented as a memorial book that collects the names and basic data of the 2,936 people executed in Madrid during the period 1939-1944, including eighty women. The vast majority were shot in the vicinity of the Almudena cemetery, the Franco dictatorship condemned their names to oblivion or relegated them to strictly private memory. Based on previous work, the list has been drawn up thanks to the investigations of the Memoria y Libertad collective -families of victims of the Franco regime in Madrid- as well as the team of historians hired by the Madrid city council in 2017, who accessed the cemetery’s own documentation. The list is accompanied by a series of studies signed by specialists in Franco’s political violence: Santiago Vega, Fernando Jiménez, Juan Carlos García-Funes, Daniel Oviedo, and Alejandro Pérez-Olivares. It also includes a text by Fernando Sánchez Castillo, author of the sculpture projected by the Manuela Carmena City Council in the same cemetery, in front of the three walls that, like the pages of a giant book, should have contained the almost three thousand names of the victims. Today, and thanks to the consistory headed by Martínez-Almeida, which proceeded to remove the names already installed, those walls are bare, as a forgetful memorial. This book is offered in modest physical support with the confidence that one day they will return to where they should never have been removed. 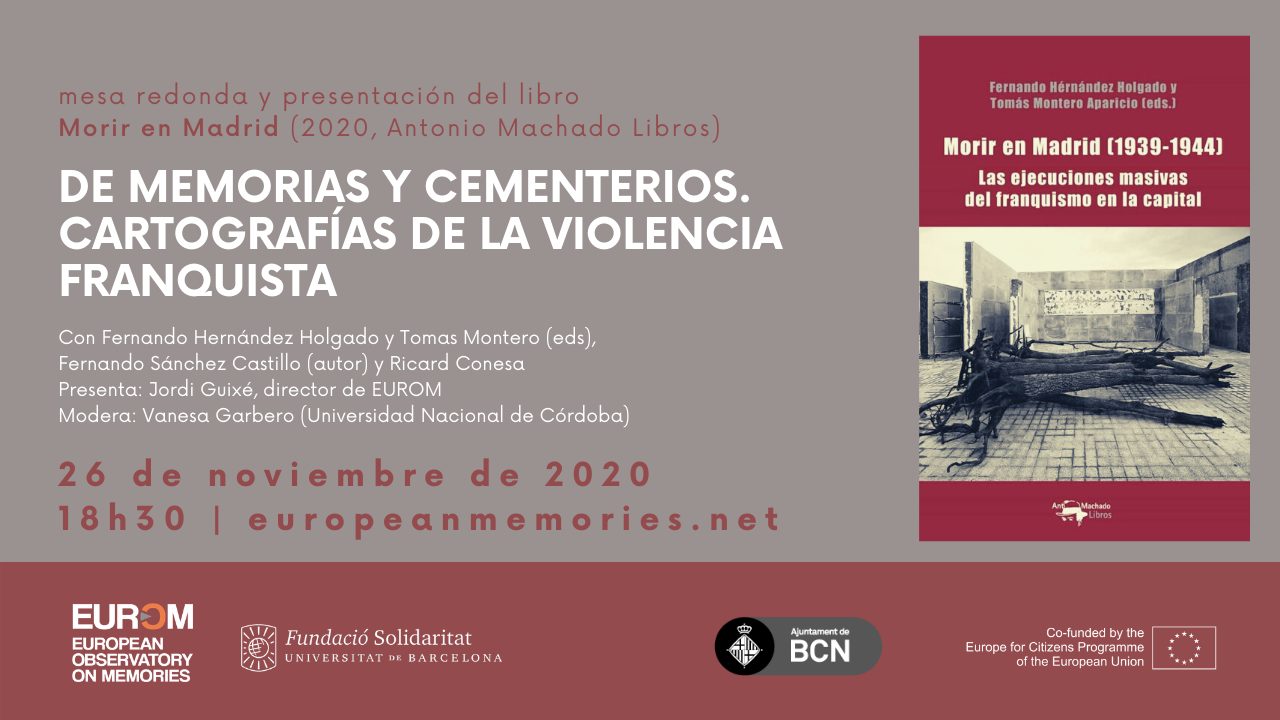