Genocides and mass atrocities. Teaching and pedagogical tools on history and memory

Organized in collaboration with the Mémorial de la Shoah and the research group DHiGeCs (Didactics of History, Geography, and other Social Sciences) of the University of Barcelona, the workshop is addressed to young researchers and students of education.

For two days, 40 students and young researchers of the field of education will participate in a training programme to get acquainted with concepts concepts and pedagogical tools about the history and memory of Genocides and mass atrocities. Featuring lectures in multiple disciplines delivered by experts from universities of France and Spain, the workshop is also an opportunity for future educators to learn about how to deal with the prevention of racism, antisemitism, and violent extremism.

Coordinated by Jordi Guixé i Coromines, director of EUROM, Bruno Boyer, director of the Mémorial de la Shoah, and Concha Fuentes (DHiGeCs), the programme will address the Holocaust, racism and postcolonialism, repressive regimes and crimes against humanity in Latin America, mass killings and violence in Spain during Francoism, the Balkan wars of the 1990’s, and the genocide of Rwanda. It will include guided visits to the Fossar de la Pedrera – a common mass grave located in the cemetery of Montjuïc – and to the Montjuïc Castle – a historical military site that was used as a prison from the late 19th century until the mid-20th century, having witnessed political trials and executions. A visit to the Castle will be carried out by the City Council of Barcelona.  The workshop will close with methodological lectures about practical issues, such as the use of technological tools and the role of museums in the teaching of history and memories.

Annette Wieviorka (CNRS)
The singularity of the Holocaust

Josep Calvet (University of Lleida)
Spain and the Holocaust

Jean Arnault Derens
Srebrenica and the Balkan wars in the 1990s

Florent Piton (Univ. Paris 7)
The Genocide of the Tutsis

Marta Simó (Autonomous University of Barcelona – ISOR)
Research in Teaching and Learning about the Holocaust. A diologue beyond borders 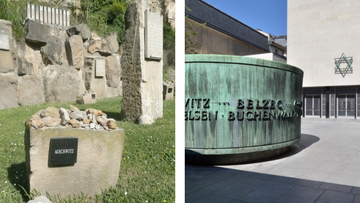