History and Memory are two related aspects in constructing the past – one as “scientific construction” and the other as the collective elaboration and laborious representation of the past-present, useful in the political steering of its time, in building the identity of the community, in the socialization of its fundamental values and the imaginary projection of the present-future.

In the 20th, and in part of the current century, Europe and the whole Ibero-American zone experienced a breakneck “descent into hell”, marked by world wars and successive military coups and revolutions resulting in dictatorial regimes, democratic transitions and countless semi-democratic situations as well as the corrosion of the state of law, which are far from quieting humanism, the defender of human rights and peace. Today we know that historical knowledge and the remembrance of contemporaneity and ‘present time ‘ are areas of debate and instrumental in building the future we want. It is with historical intelligence – what History scrutinises and the collective memory consolidates – that we are led to imagine the future and to live the hesitations of the present.

Aware of this reality, promoters of memory groups, citizens and governments have valued, in many ways, the “difficult inheritances” and traumatic dictatorships, both in Europe and throughout Latin America, with the clear aim of avoiding past mistakes and building “schools of citizenship” and the defence of human rights.

This International Conference takes the described reality as a starting point and the Ibero-American dialogue as a strong contribution to the building of a common space of solidarity and the preservation of human rights and peace.

Organized by the Museu do Aljube and the Institute of Contemporary History of the Faculty of Social Sciences and Humanities of the Universidade Nova de Lisboa, in the framework of Past and Present – Lisbon, Ibero American capital of Culture 2017. 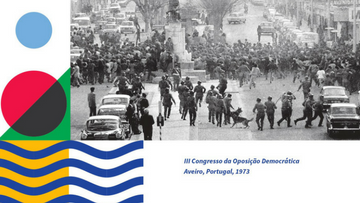