Controversial memories and heritage. Uses and abuses of the recent past

The past seems omnipresent to us and is contained in the present in such a way that it has, occasionally, become a resource used in a wide variety of manners. These uses are so manifold that the fostering of a thorough knowledge of what has gone before us has frequently become an exception, neglected while commercialization, superficiality and trivialization have taken over. Everywhere one looks, especially in the area of heritage management, there are recreations that aim to achieve the impossible goal of reproducing the past as it occurred. Moreover, we have witnessed a proliferation of literary creations, films and television series for which the past has been a great source of inspiration. Meanwhile, an ever-growing number of video games, theme park attractions, or fun leisure activities such as escape rooms have created that base their storylines on historical events or characters. This industrialization of the treatment of the past has led to distortion and a lack of rigour. The issue is compounded when the past that one aims to restore or exploit for the purposes of tourism is related to events of a traumatic nature; that is, past events that remain unresolved in the collective memory, such as relatively recent armed conflicts, genocides, dictatorships, dirty wars and political violence.

A tool for approaching the past in this way is heritagization. One of the questions that may be posed is whether these conservation options should have ethical boundaries. What are the acceptable mechanisms of heritagization when it comes to dealing with relatively recent traumatic events? The term “memory industry” has frequently been employed to criticise what is considered a disrespectful approach to the past. Trivialization, simplification and cultural or political Manicheanism are some of the terms used when the visions of the past that end up gaining social traction are far removed from supposedly scientific historiographical accuracy and intellectual honesty. However, we must also ask who should guarantee this accurate transmission and dissemination of readings of the past. Public policies on historical memory can undoubtedly play a crucial role. They could constitute the foundation on which to build what is referred to in the English-speaking world as “public history”; that is, to ensure that content generated in the field of specialized historiography reaches the general public. As such, it is obvious that in order to provide this access, it is essential to foster and disseminate this content in a way that adapts to heritagization techniques and cultural tourism circuits.

Therefore, when it comes to memory, especially recent memory, one may argue that controversy is almost implicit. In this respect, clashing political positions, opposing views on heritagization, or even commercial and tourism-related expectations, invariably involve heated debates. Further complications may arise when, in public space, traces remain of previous undemocratic political regimes. Statues related to slavery and colonialism, symbology and monument sites related to Nazi, fascist (or Francoist) ideology, along with Stalinist imagery, are some of the best-known examples. How to deal with this legacy is one of the main issues that this conference aims to address: eradication, resignifying, trivialization, indifference, abandonment and oblivion are frequently used terms in relation to this matter.

11.30 h Stephane Michonneau
“The heritage of the Spanish Civil War: the controversial case of Belchite”

16.00 h Nathalie Raoux
“A memory for history or a history for memory? Controversies concerning the death of Walter Benjamin”

17.00 h Valentina Pisanty
“The guardians of memory and the crisis of democracy”

8.00 h Banyuls-Portbou walking route in tribute to Walter Benjamin. You will be accompanied on the route by an artist who will carry out an artistic creation within the spirit of Walking Art witch offers an array of possibilities. Project organized with the collaboration of the Centre de Creació Contemporània Nau Côclea, Camallera. 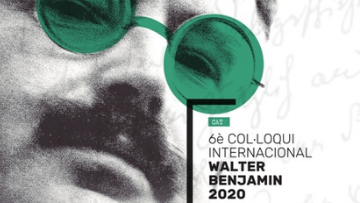