Decolonial movements in the last decade and their recent rise as a result of social mobilisations such as #BlackLivesMatter have presented the colonial issue as an underlying cause of multiple forms of material and symbolic discrimination suffered by migrants and of the underdeveloped status of their countries of origin. The colonial issue is understood as an enduring historical wrong in the present day in the form of migration policies, racism and global inequalities, but also the persistent plunder and dispossession of the history of colonised peoples. Among their claims are demands for policies of reparation, the revision of public space and the return of property from the so-called “colonial plunder”.

Various countries that have suffered colonisation have pointed the finger at dozens of European museums (the British Museum in London, the Louvre in Paris, the Royal Museum for Central Africa in Tervuren, etc.), demanding the restitution of cultural property that tells their history. Institutional responses have emerged from this heated legal battle, which have ranged from the resignification of collections (as is the case of Tervuren) to the commitment to the restitution of heritage, as announced by Emmanuel Macron in 2018 as regards the steps to be taken to facilitate the return of some artefacts to countries such as Mali, Benin, Nigeria, Senegal, Ethiopia and Cameroon. Even UNESCO itself currently has an intergovernmental committee that oversees requests for the return of cultural property to different countries. This increasingly contentious issue among civil society and academia could also affect some of the collections in our museums.

These seminars seek to reflect on how the controversy on the restitution of colonial heritage is unfolding at an international level, to explore how it is being addressed by the museums in Barcelona and to allow the voices of the various agents currently taking part in the debate to be heard.

All sessions will be held in-person only and will count with simultaneous translation (Spanish/Catalan-English).
Registration is required

Dan Hicks
Professor of Contemporary Archaeology at Oxford University, Curator at the Pitt Rivers Museum and author of “The Brutish Museums: The Benin Bronzes, Colonial Violence and Cultural Restitution”

11.30 am – 1 pm
Round Table 1
Perspectives and Public Policies on the Return and Decolonisation of Heritage
Moderated by: Celeste Muñoz, EUROM – University of Barcelona)

4 – 6 pm
Round Table 2
Between the Return and Decolonisation of Heritage. International Perspectives
Moderated by Núria Ricart, University of Barcelona

Directed by Jordi Guixé i Coromines

Organized by the Council of Democratic Memory – Barcelona City Council, European Observatory on Memories of the University of Barcelona’s Solidarity Foundation,  Museum of Ethnology and World Cultures – Barcelona Institute of Culture (ICUB) 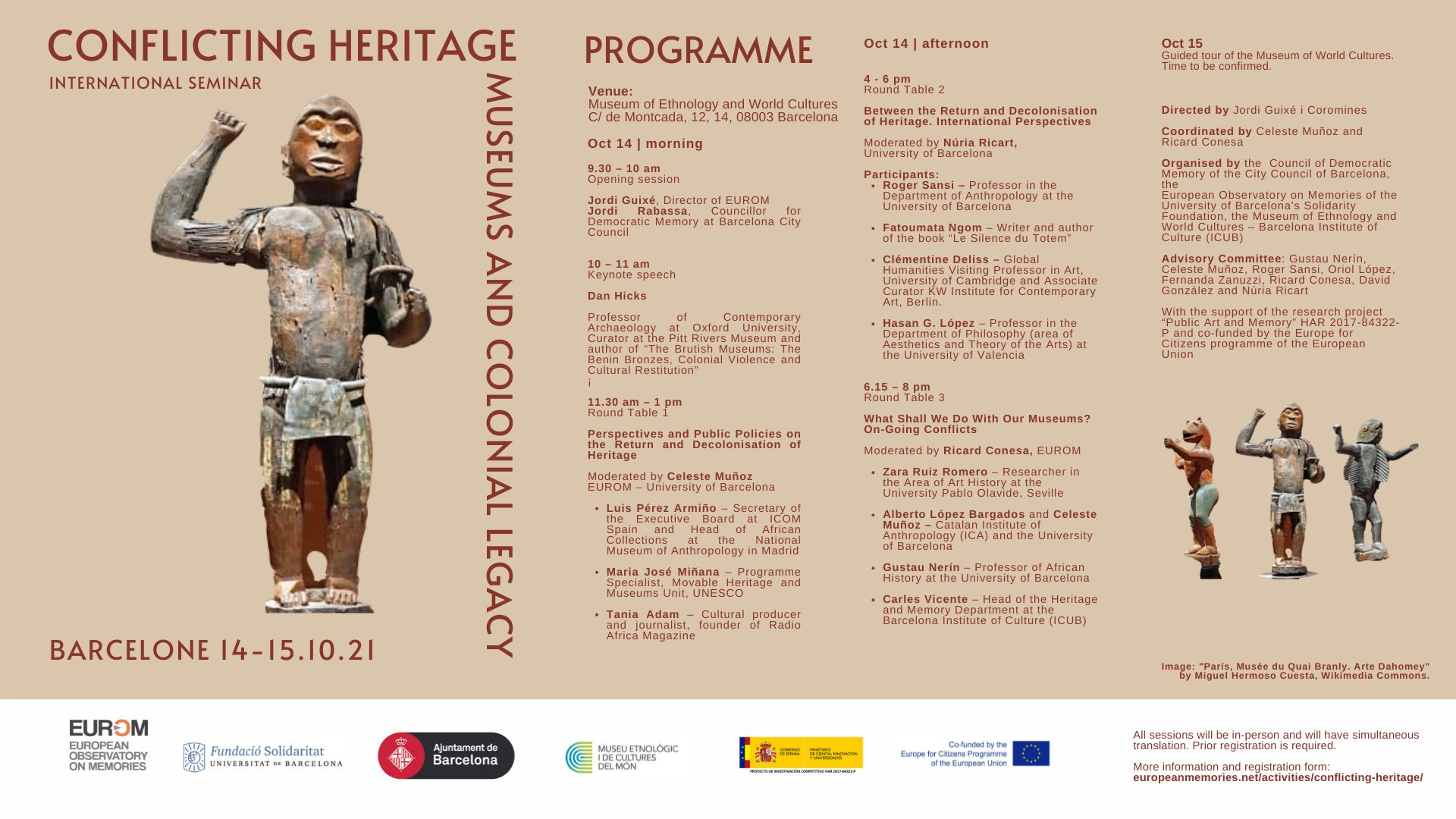