30th anniversary of the German Reunification

Presenting the documentary Hin und Her (Back and Forth), by Stefanie Kremser and Margit Ruile, and a music-poetry performance by the solist guitar player Nora Buschmann and the actor Àlex Brendemühl.

This year marks the 30th anniversary of the German reunification, a crucial turning point in the contemporary history of Europe and its unification process. The German Democratic Republic was created in November 1949, marking the beginning of the Cold War, with the construction of the Berlin Wall in 1961 as one of its best-known symbols. On October 3, 1990, the GDR and the Federal Republic of Germany regrouped, having chosen one of the two constitutionally implemented options. Although the chosen option is considered the simplest one, it has socially produced feelings of “occupation” and “annexation.”

To discuss the lights and shadows of the reunification process, the European Observatory of Memories and the Goethe Institut have invited three German artists of the “post-wall generation” to share their memories and thoughts about the historical, social, and cultural contradictions that emerge from this commemoration. Our aim is to shading some light on the collective memory of the Reunification, taking as a starting point the memories and works of our guests.

The meeting will be presented and moderated by the historian Jordi Guixé, director of the EUROM, who will point out the historical context of the reunification. The writer and screenwriter Stefanie Kremser will introduce her first documentary, Hin und Her (From Here and There), filmed between Munich and Berlin in 1989 and 1990 and co-directed by Margit Ruile. It portrays two moments in the lives of five anonymous people who had fled the GDR through interviews conducted shortly before and just after the demolition of the wall.

The screening will give rise to a conversation with solo guitar player Nora Buschmann, born and raised in the GDR,  and actor Àlex Brendemühl, whose father left the Eastern country in 1961. Continuing the collaboration that emerged from the show “All along the watchtower” (2019), they will close the meeting with a brief performance of music and poetry, a bit of food for thought.

Jointly organized by the EUROM and the Goethe Institute Barcelona, with the support of the City Council of Barcelona and co-financed by the Europe for Citizens programme of the European Commission. 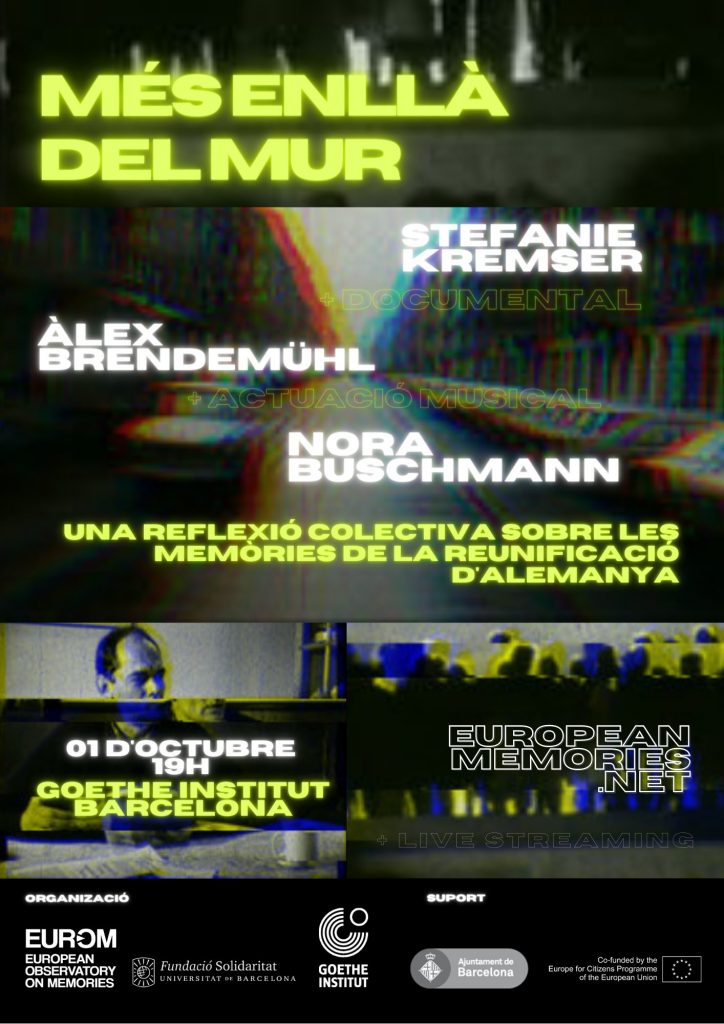