“What we have created here is an antidote to amnesia”
Peter N. Carroll, historian

Nine years ago, on March 30th, 2008, a national monument to the Abraham Lincoln Brigade was unveiled in San Francisco. Forty feet long and eight feet high, the monument is made of forty-five onyx panels that are framed in a steel structure.  Every day, hundreds of people make their way into the city from the ferry building and pass by this powerful and dramatic reminder of the Lincoln volunteers. The monument to the Lincoln Brigade stands as the only national monument and permanent outdoor structure to commemorate one of the most remarkable acts of bravery of the Twentieth Century.

Between 1936 and 1938, responding to a military coup in Spain—led by General Francisco Franco with the support of both Hitler and Mussolini—almost 3,000 US anti-fascists joined over 35,000 volunteers from around the world to form the International Brigades. The American volunteers would later become collectively known as the Abraham Lincoln Brigade. This was a paramount event in our history. It was a moment in time when the gross injustice of a military coup against a democratic government was met with outrage across the world and many thousands of men and women outside Spain stood up against the fascist takeover. As the coup evolved into a bloody civil war, the International Brigades volunteered to fight for the defense of the legitimate government. They risked and often gave their lives for the idea that democracy should triumph.

Building a monument to this legacy was a great achievement. Years of discussions and controversy among the veterans preceded its completion. Some objected to it, favoring “action” over “memory” (i.e. using the money for other causes rather than building a monument,) others wished it were different or in another location but eventually, the project came around. 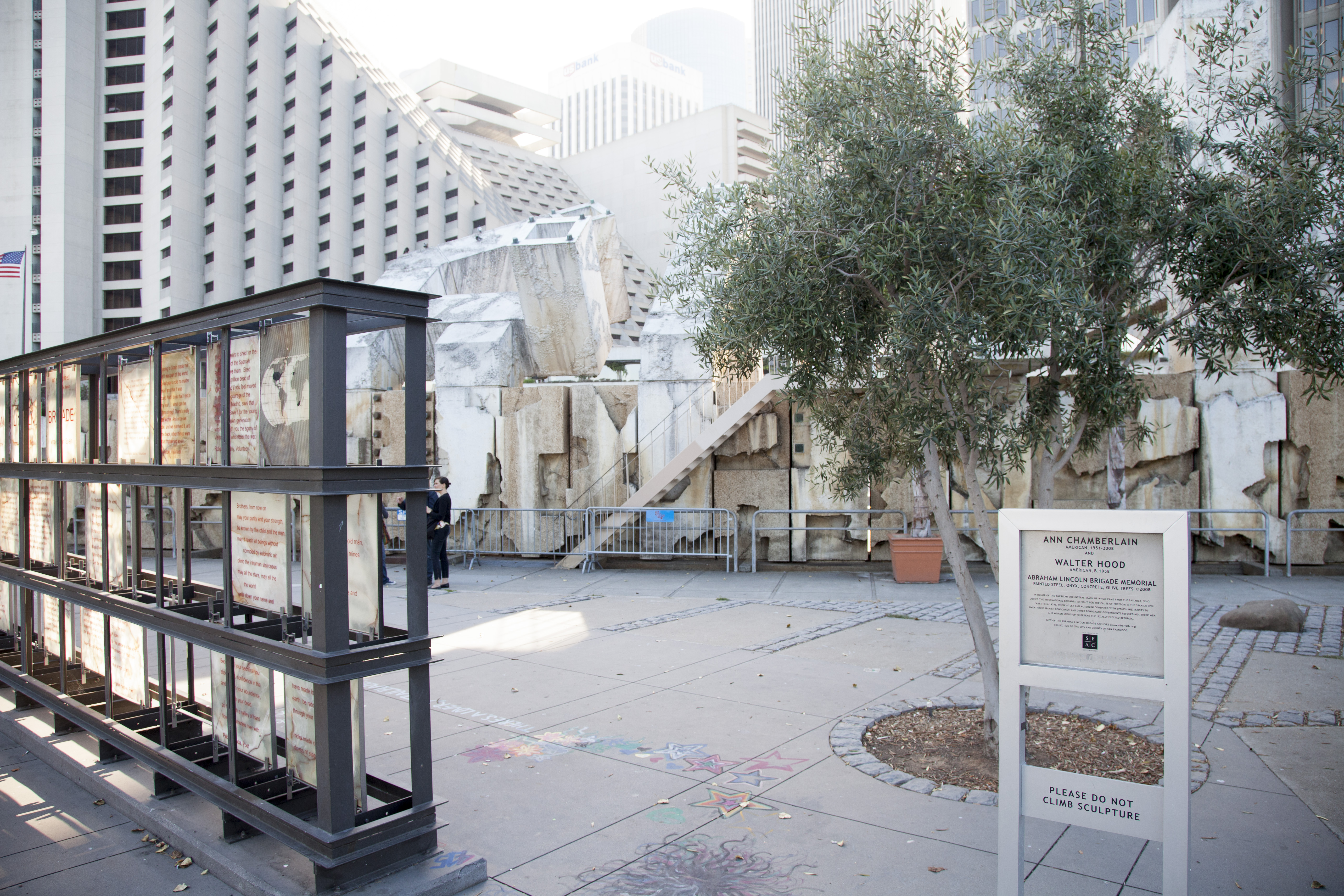 When the dedication ceremony was held in 2008, there were thirty-nine surviving veterans and eleven, at their old age, were present at the ceremony. Today, there are no more American volunteers left, but their ideas are honored and preserved in this monument.  San Francisco Mayor Gavin Newsom attended the inauguration as did the Spanish Ambassador to the US Carlos Westerdorp y Cabeza and the Director of Cultural Affairs for the San Francisco Arts Commission Luis Cancel. Oddly enough President Reagan’s former Secretary of State, George Shultz, also attended, along with a crowd of 1,200 people.

Shortly after the monument’s dedication, two of the veterans who had participated in the ceremony passed away unexpectedly (and three other veterans died during the following weeks). These deaths were a shock but showed the importance of safeguarding historical legacies. The veterans of the Lincoln Brigade had a good idea about what would happen and took care to prepare for the inevitable. They assigned the Abraham Lincoln Brigade Archives (ALBA) as their legal successor, creating the largest and most comprehensive historical collection of the Lincoln volunteers. They did so to make their antifascist legacy permanently available to the public. The creation of the monument was also part of this endeavor.

The two artists who collaborated on this unusual design, Ann Chamberlain and Walter Hood, were chosen after a public competition. The design provides for a display of archival photographs of members of the Brigade, both in Spain and the years afterward, to emphasize the volunteers’ continuing activism throughout their lives. A series of texts accompany the images, including the words of poets Edwin Rolfe and Pablo Neruda, political figures such as Dolores Ibarruri, and the writers Ernest Hemingway, Albert Camus, and Martha Gelhorn. Their words convey the anti-fascist principles of the men and women who defended the Spanish Republic, including those who made up the Abraham Lincoln Brigade.

“To make active the process of memory is perhaps what is the most difficult in art,” noted Ann Chamberlain at the time.  She also asserted that the idea of the monument is to re-infuse hidden histories with emotional resonance and contemporary relevance, becoming much more than a finite physical structure in a specific place. These stories resonate anew today as violent strands of xenophobia and far-right nationalism spread across the world.

The monument is not only for us. As veteran Abe Osheroff put it at the monument’s dedication:

“… I’ll tell you what it’s all about for me. Some day in the not too distant future, some guy will be walking through here with a couple of his adolescent kids, and one of the kids will say, “Dad, what’s that?” And this Dad may know the answer. And giving that answer is like putting another spark plug into the vehicle of progress that we’re all engaged in.” 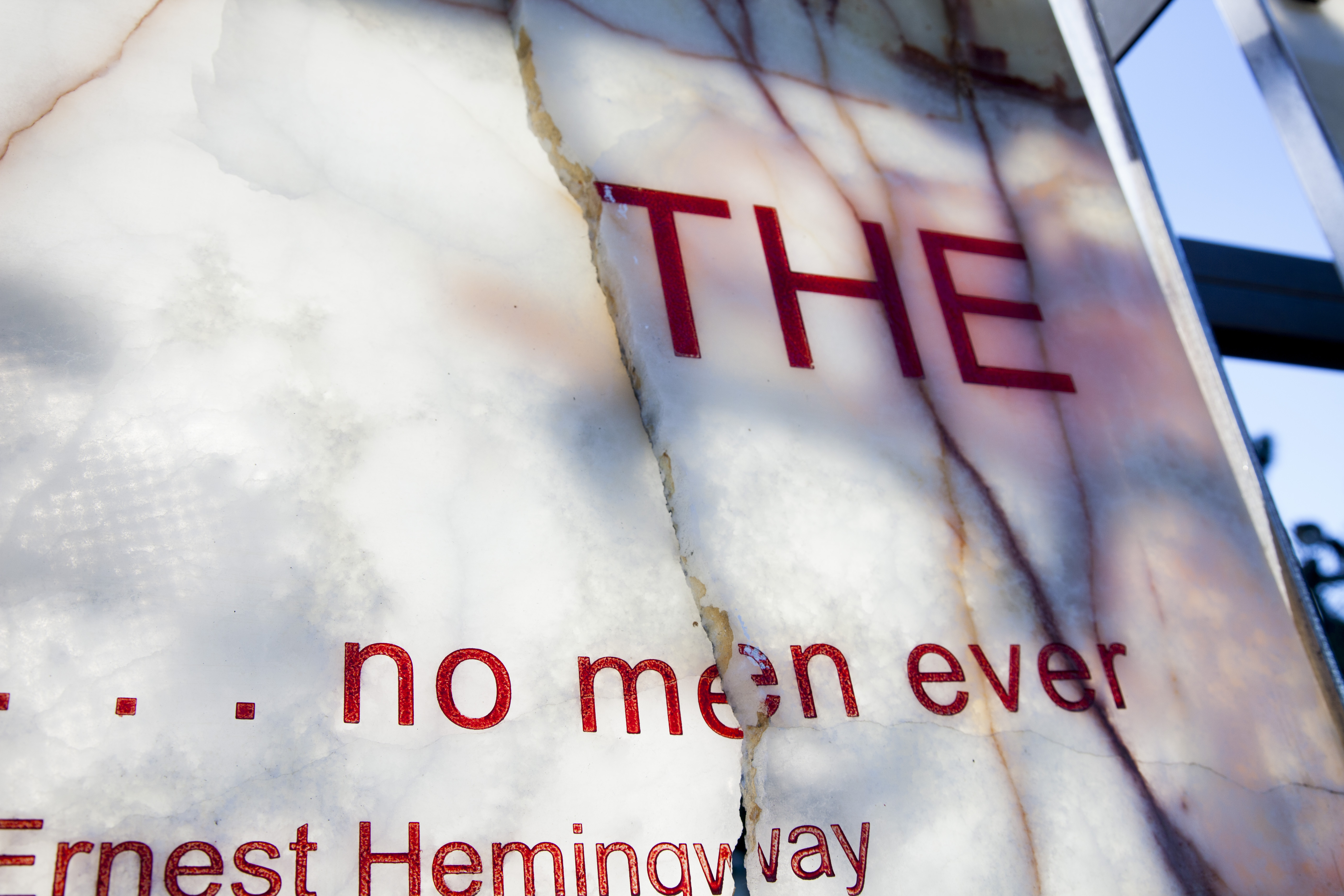 Unfortunately, the monument is currently in desperate need of restoration. The elements have been harder on the structure than expected and many of the translucent onyx panels are cracked. ALBA is actively working toward creating an endowment fund that will provide for the upkeep and preservation of the monument.  By looking back, we march forward with confidence and strength. Long live to the members of the International Brigades!