home Overview “The long shadow of the past” in the short light of present.

Aleida Assmann, who will be awarded the Peace Prize of the German Book Trade together with her husband Jan Assmann this year (14 October 2018), has chosen one of my works (1) as the title image for her book “Shadows of Trauma: Memory and the Politics of Postwar Identity”. On 27 January 1997, the German Holocaust Remembrance Day that marks the anniversary of the liberation of the Auschwitz concentration camp, I projected ARBEIT MACHT FREI [Work sets you free] onto the Brandenburg Gate. After reunification, the reopened Brandenburg Gate became a national symbol for the German people representing unfractured German identity and historical continuity. However, the German people have lived in the shadow of a rupture in civilisation since Auschwitz. Their identity is broken. Along with the Brandenburg Gate, the Holocaust Memorial does not mark a clean break with history. If the Germans celebrate their Brandenburg Gate as a national symbol, they should never forget the other gateways they have also built – the gateways to the concentration camps. In this lighting display, “Die Tore der Deutschen” [The Gateways of the German People”], both gateways fuse into one single image for a night of remembrance and commemoration. The light of the present could no longer be separated from the shadow of the past.

A few years before in 1994/95, I submitted the following concept for the competition to design the Memorial to the Murdered Jews of Europe: destroying the Brandenburg Gate, grinding it to dust and scattering the remains onto the proposed memorial site. The site would be covered with granite plates, as are typical on the pavements of Berlin.  Would the German people sacrifice their national symbol to be a Holocaust memorial? Would they bear the void of these two places: instead of a national monument to the victims, simply an empty space; instead of an immense field of stelae, an empty accessible site with the pulverised remains of the Brandenburg Gate, the national symbol of the nation of the perpetrators?

It goes without saying that I was eliminated from the competition in the first round of judging. However, the idea prevailed more and more like a radical alternative to all the suggested new memorial structures and attracted international attention. James E. Young wrote: “Rather than commemorating the destruction of a people with yet another constructed edifice, Hoheisel would mark destruction with destruction. Rather than filling in the void left by a murdered people with a positive form, the artist would carve out an empty space in Berlin by which to recall a now absent people” (2).  The idea of grinding the Brandenburg Gate to dust as the Holocaust Memorial has spread like a rumour to reach present-day city tours. Guides in tour buses passing the Brandenburg Gate explain that a “crazy artist” once wanted to demolish it and spread its remains on the site where the Field of Stelae currently stands as the Holocaust Memorial.

There is a hierarchy of memorials in Berlin. For instance, the Field of Stelae for the Murdered Jews of Europe by Peter Eisenman, the largest and most expensive memorial. However, the effects of the elements are now breaking up the memorial, because no reinforcement was put in place when casting the dark-grey stelae, which were built hollow with thin walls. It’s starting to break up and many stelae are only held together by steel bands.

A Holocaust Memorial that is destroying itself! A symbolic problem of the German people?

Closer to the Reichstag but much smaller than the Field of Stelae lies Dani Karavan’s Memorial to the Sinti and Roma Victims of National Socialism, constructed much later. In Tiergarten, not far from the Field of Stelae and closer to a stele in formal terms, Elmgreen & Dragset have created the Memorial to Homosexuals Persecuted Under National Socialism, which is smaller than the memorial for the Sinti and Roma victims. However, there is a group of victims that has been forgotten in this succession of memorials established in the German capital: the first victims of the Holocaust. The Nazis used them to put to the test mass murder carried out with gas. It started at the onset of the war in 1939 in Posen/Poznán, my place of birth, and was carried out in 1940/1941 in secret as what was known as a T4 action in six death camps in Germany. The Holocaust began with the murder of mentally ill and disabled people, who were considered “unfit to live” by race ideology.

Over 300,000 people were initially murdered in the gas chambers, then through medication or starvation. These victims had no advocacy group. They were forgotten, and their murder was often kept secret even in their families. To this day, there is still a taboo surrounding mental illnesses. The victims of “euthanasia” are the Holocaust’s forgotten victims. There has only been a memorial for them in Berlin since autumn 2014, marking the site of the former mansion in Tiergartenstraße 4 where the mass murder of mentally ill and disabled people was planned, carried out and organised. After the war, West Berlin built on this exact spot the Berlin Philharmonic concert hall by the famous architect Hans Scharoon. The site of the greatest crime against humanity was built over with the most beautiful architecture for classical music directed by the world’s most important conductors.

Should music make us forget crime?

Together with Andreas Knitz, with whom I have collaborated for over twenty years, I participated in the competition for the Memorial for the Victims of National Socialist “Euthanasia” Killings with the following proposal.

We didn’t want to create a new memorial for the very first victims of the Holocaust. There was already Peter Eisenman’s Field of Stelae. We wanted to take six stelae from this memorial since the Nazis murdered sick and disabled people in gas chambers in six places.

We wanted to mark the empty spaces in the Field of Stelae with the names of these places (Hadamar, Grafeneck, Brandenburg, Pirna-Sonnenstein, Hartheim, and Bernburg). We intended to mark the plot of the former mansion at Tiergartenstraße 4 and raise awareness of the overlap of the plots of the T4 mansion and the Philharmonic. One of the stelae would have recalled the site of the killing of the sick in the foyer of the Philharmonic, thereby to some extent dedicating the concerts there to the 300,000 victims of the “euthanasia” killings. Of course, though, the Holocaust Memorial is untouchable and the stunning architecture of the Philharmonic is listed as a protected monument. Although we did receive a prize of recognition from the jury, the realisation of the idea was unthinkable. Manfred Schneckenburger, who curated documenta 6 and 8, once said to me regarding my memorial ideas: “Don’t be surprised that your works are so often eliminated from competitions. You build repudiation into your own designs!”

However, together with Andreas Knitz, I did win another competition by the Die Weißenau Centre of Psychiatry in Ravensburg a few years earlier (2006) for a memorial to the victims of “euthanasia”.

A memorial bus permanently blocks the old gates of the former sanatorium Ravensburg-Weißenau, a departure point for buses to the extermination camp Grafeneck. A second identical grey memorial bus changes its location both along the administrative channels of the “T4 programme” and the historical routes of the “death buses”. This work isn’t just a memorial to the victims of “euthanasia”, but also reflects the act and perpetrators by using the grey buses, the tools of the perpetrators, as a mode of transport of remembrance, to some extent as a vehicle of history. Transporting the 70-tonne buses is transporting suppressed history. Moving the memorial plays an important role here. Similar to our memory, this symbol of remembrance in the form of the grey bus comes and goes; just as in the present, in day-to-day life, issues that are suppressed and made taboo always suddenly reemerge and then disappear. Memory is a process. It creates images, forgets them, changes constantly and is forever in motion. Memory and suppression are also central themes in psychiatry. The bus follows the administrative channels of the “euthanasia” killings, marking places of the deed, of the victims and of the perpetrators, then leaving again. The second remains at its respective site for as long as initiatives and municipalities agree amongst themselves. Transport is financed by donations and public funding. What’s crucial is that the memorial remains in motion. It is an open process, at the end of which the question remains: if nobody wishes to borrow the memorial and the grey bus stops where it is, does memory then also stop? The 75-tonne memorial distributed over three flat-bed lorries is still moving from place to place. It has since been at 20 locations and covered almost 8,000 km. One important location was the Philharmonic in Berlin. The Monument of the Grey Buses stood there for a year in 2008 and marked the spot where the memorial for the forgotten first victims of the Holocaust was finally installed in 2014. 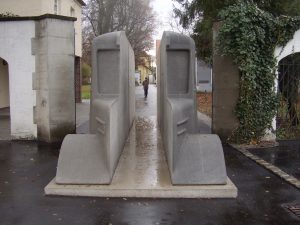 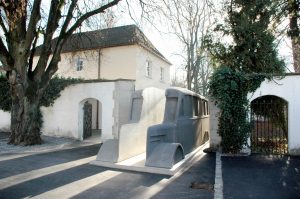 I haven’t just done artistic work on the German past, but also on the military dictatorships in Latin America and Cambodia, as well as Franco’s dictatorship in Spain, where I tried to work more as a catalyst to initiate the process of remembrance. In Spain, I was also asked for advice on how to deal with monuments from Franco’s dictatorship. For the Monumento a los Caídos in Pamplona, I suggested breaking it up architectonically and converting it into a museum and place of discussion regarding the Civil War. Indeed, there is still no national museum in Spain about the Civil War. However, it was now decided to completely demolish it. We can tear down monuments, but history cannot be torn away; we must see the past before our own eyes and within ourselves since it is part of our life.

In Berlin, politicians have also demolished the Palace of the Republic and rebuilt a backdrop of the old city castle. The “imperial past” is to make us forget the site of the “communist past”. Daniel Libeskind’s extension to the Military History Museum in Dresden is a good example of how a historical site can be broken up in a contemporary manner.

To conclude, some experiences that I have accumulated during my more than thirty years of work on art and remembrance.

I was born in 1944 and grew up under the “long shadow of the past” with the profound silence of our parents. Through the medium of art, I prised open the family silence. My work more and more powerfully developed from commemorating the victims to confronting the perpetrators. This is the German legacy. Through my work, I hope to emerge from the long shadow of the past into the short light of the present and free myself from the darkness. However, the past still holds me captive. Each generation recreates its own past from its present. The past is an endless stratification of many different images. We only retrieve those that fit with our present. Such is the case with memorials too. They always say more about us and our time, our art and style than exposing the past. This is gone and all the images that we make of the past and form into monuments no longer reach it. Everything that I as an artist do regarding monuments is incorrect. I simply have the chance to do it more or less incorrectly. Would the right thing thus be to no longer make any monuments?