The memory of state violence and the narrative of its perpetrators will be discussed within the international seminar “Narratives of memory on state violence: the speech of the perpetrator”. The seminar will be held on February 22, 2017, from 9.30 am to 2 pm at El Born Centre de Cultura i Memòria in Barcelona, and is a proposal by the Institute of Present Pasts of the City Council of Barcelona in collaboration with the Fundació Cipriano García, the Consortium for Advanced Studies Abroad, and the European Observatory on Memories of the University of Barcelona’s Solidarity Foundation.

Three speeches and a roundtable will focus in the process of construction of the memory of perpetrators in Argentina, Spain and the post-Communist countries of East Europe, underlining their narratives, logics, and the morals underpinning them. The debates are aimed to deepen into the discourses of State violence, a praxis of political repression and social control that is identifiable in different spaces and historical moments. The seminar also aims to widen the interest over this line of research in Spain, where it is considered as barely explored.

The debates will be introduced by Ricard Vinyes, Commissioner for Memory Programmes at Barcelona City Council, together with Jordi Guixé, director of the European Observatory on Memories of the University of Barcelona’s Solidarity Foundation, and Javier Tébar, director of the Historic Archive of Comissions Obreres de Catalunya.

The first presentation will be delivered by Valentina Salvi, director of the Núcleo de Estudios sobre Memoria del Instituto de Desarrollo Económico y Social/CONICET (Argentina). Salvi will discuss the speech of the perpetrator and the problem of truth in Argentina in the framework of the broadcasting of the trials of the representatives of the military dictatorship. After, José Maria Faraldo, professor at the University Complutense of Madrid and specialized in Russian nationalism, will introduce the issue of memory as politics, focusing on the use of the perpetrator in the post-Communist regimes of East Europe.

The Spanish case will be discussed by José Antonio Pérez, professor at the University of Basque Country and co-author of the book “Building memories. The historical story after terrorism in the Basque Country” (Construyendo memorias. El relato histórico después del terrorismo en Euskadi), published in 2013 by La catarata, Madrid. He will introduce the memory of perpetrators in the framework of police brutality in the Basque Country during Dictatorship and the transition to democracy in Spain.

The seminar will conclude with a roundtable moderated by Javier Tébar. It will include the participation of the social psychologist Isabel Piper, of the University of Chile. Piper is specialized in the analysis of the narratives of violent conflicts, with emphasis on social, generational and political memories of the recent past in Chile. 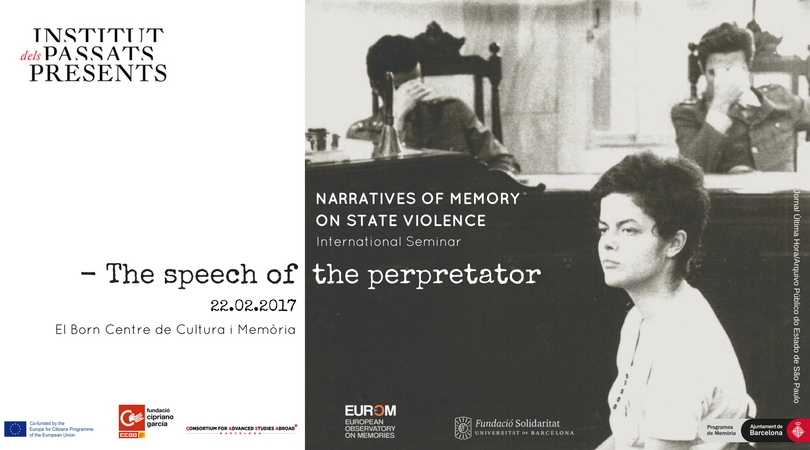