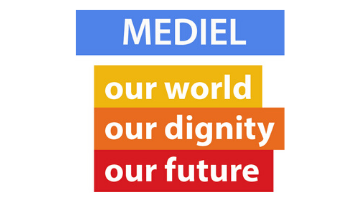 MEDIEL develops intercultural projects based on the production of documentary films and educational interdisciplinary workshops with artists and young people. Since 1999, its activities have offered a number of young Europeans the chance to assume the role of citizen-reporter. Their reports are an invitation to gain a better understanding of our European society, its past, its ways of living, its institutions, its questions, and its fragilities.

MEDIEL has developed a methodology for organizing its projects supported by media and young people and based on the concept of “citizen-reporter” aimed at meeting European cultures, history, and people and mutually understanding them, with the ability to identify common values. Looking in the direction of civil society, the citizen-reporters adopt values of openness and dialogue. Through their experience, they sometimes have the same attitudes of mistrust and prejudice that we can all experience or maintain, sometimes unconsciously, towards people and realities of which we have little or no knowledge. These young reporters are “cross-borders” in both the literal and figurative sense. They invite us to go beyond our prejudices, to change our point of view and our mentalities to make way for new things and personal enrichment.

In 2012 the project « Etty Hillesum, The Convoi” was selected to be part of the 25 features about the “Europe for Citizens programme” of the European Commission.

Other television productions with the cultural channel ARTE followed in the fields of remembrance in Europe:

MEDIEL has also developed a close collaboration with the Berlin artist Roman Kroke from the Berlin University of the Arts (UdK). Kroke develops, directs and coordinates interdisciplinary workshops (art, science, history, technology, literature, philosophy) adapted to the respective age-group and backgrounds of the participants.