Public Art and Memory. Faculty of Fine Arts of the University of Barcelona

Research Project Public Art and Memory. Developments for the Public Art program in the networks of Francoist spaces of repression in Barcelona (2017-2020)

The project is based on the concept of the value of the public space integrated into the urban system, paying special attention to the transmission of its historical and social significance. Its main goal is the development of a public art program in the network of spaces of repression of Francoism in Barcelona.

The project foresees two levels of results considering that few studies have studied this problem from a systemic point of view:

In this sense, the methodology presented conceals the need to configure the network’s historical and territorial status to address the public art program from a systemic and interdisciplinary point of view. For this, the process requires a bottom-up approach (built from civil society) in which citizen’s demands and expectations are embedded in this regard. The project aims to critically coordinate the development of contents with the public art and memory policies of the City of Barcelona.

In particular, the work team must ensure the development of the work of: 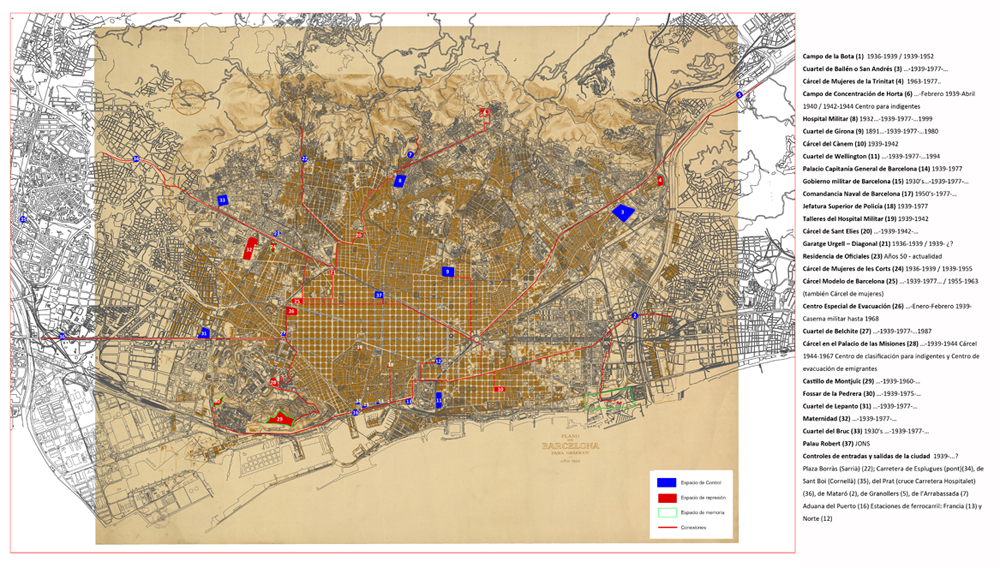 The spaces of Francoist repression in Barcelona have had multiple configurations in the territory between 1939 and 1975 according to the different stages of this period (postwar, developmentalism, transition). It was especially bloody during the first years (1939-1952) in full “state of war” and therefore exceptionally at the legal and military level. These spaces were strategically distributed in the territory, taking advantage of the use of buildings or places already used previously for this purpose during the republic or before, and creating new ex-new ones, in specific places for territorial control. The objective was the population considered enemy of the regime, but also strategically, the dictatorship wanted to instill fear to reach the population as a whole, on which a staunch institutional and citizen control was exercised. In this regard, the specific places of repression operated as spearheads of a comprehensive strategy of control over society as a whole.

Public space has hardly permeated this memory, disfigured by the forgetfulness of the transition and the divergences of local urban developments. In some cases, academic research and citizen demands have succeeded in overcoming obstacles and promoting public intervention and transmission policies, although in isolation in the territory (Remesar et al., 2014). In view of this problem, the central theme of the project addresses the issue of contemporary transmission of this memory (Ricart, 2016; Paz, 2016) prefiguring the idea that what once constituted a network of spaces for social control and citizen repression It can now be the object of a communication system through public art.