De Hollandsche Schouwburg (Dutch Theater) is part of the larger joods cultureel kwartier (Jewish cultural quarter), which consists of the Jewish Historical Museum, the Jewish Historical Kids Museum, the Portugese Synagogue, the Hollandsche Schouwburg (Dutch Theater), and the National Holocaust Museum. It is further financially supported by the Erasmus+ program. 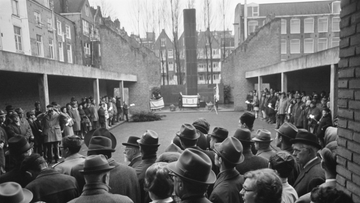 The Hollandse Schouwburg (Dutch theater) was opened on the 5th of May 1892 in the Amsterdam Plantage District, it was designed by the Dutch architect Cornelis Antonius Bombach. Initially it was named the Artis Schouwburg, but two years later it was renamed the Hollandsche Schouwburg. In the beginning of the Nazi occupation of the Netherlands, little changed in the daily life of the theater, but in 1941 the Nazis changed the name of the theater to the Joodse Schouwburg (Jewish Theatre). This happened in tandem with the Nazi law 138/41, which excluded Jews from many public spaces in an attempt to further segregate them from the rest of the population. From that point on only Jewish actors and artists were allowed to perform – for a strictly Jewish audience. Inadvertently, this however did lead to the theater becoming a breeding ground of high level Jewish culture, with many Jewish orchestras, cultural orginisations, and theatre companies being formed and performing. The theater furthermore started to function as a location where Jewish wedding ceremonies were held.

On the 20th of July 1942 the Nazis started using the Hollandsche Schouwburg (Dutch Theater), then named the Joodse Schouwburg (Jewish Theater), as a deportation location. From then on the Nazis also started to call the theater the Umschlagplatz Plantage Middenlaan (Storage place Plantage Middenlaan). All shows stopped and Jews from Amsterdam and the surrounding areas were summoned to report at the Theater. The theater started to function as a prison for those Jews captured in the razzias and those that arrived ‘voluntarily’. From 1943 onwards the Nazis also employed Dutch collaborators, also known as the Colonne Henneicke (Henneicke Column), to expose Jews that had gone into hiding.  At arrival in the theater registration took place, and the waiting period started. People were locked up in the theater for hours, days, and even weeks, before being deported to the Dutch transit camps of Westerbork and Vught. The theatre, which was not built for housing so many people for such a long time became a cramped, unhealthy, and fearful place. The Nazis also took control of the nursery at the opposite side of the street, where children up to 12, separated from their parents, awaited deportation. This nursery however also became a place of resistance, with resistance groups smuggling out Jewish babies in for example bags, handing them over to other resistance groups on Amsterdam Central Station, who then proceeded to bring them to hiding places. Around 600 kids were saved from deportation in this fashion. The last transport from the Hollandsche Schouwburg (Dutch Theater) took place on the 19th of November 1943. Tens of thousands of people had been placed on transport from the Hollandsche Schouwburg (Dutch Theater). 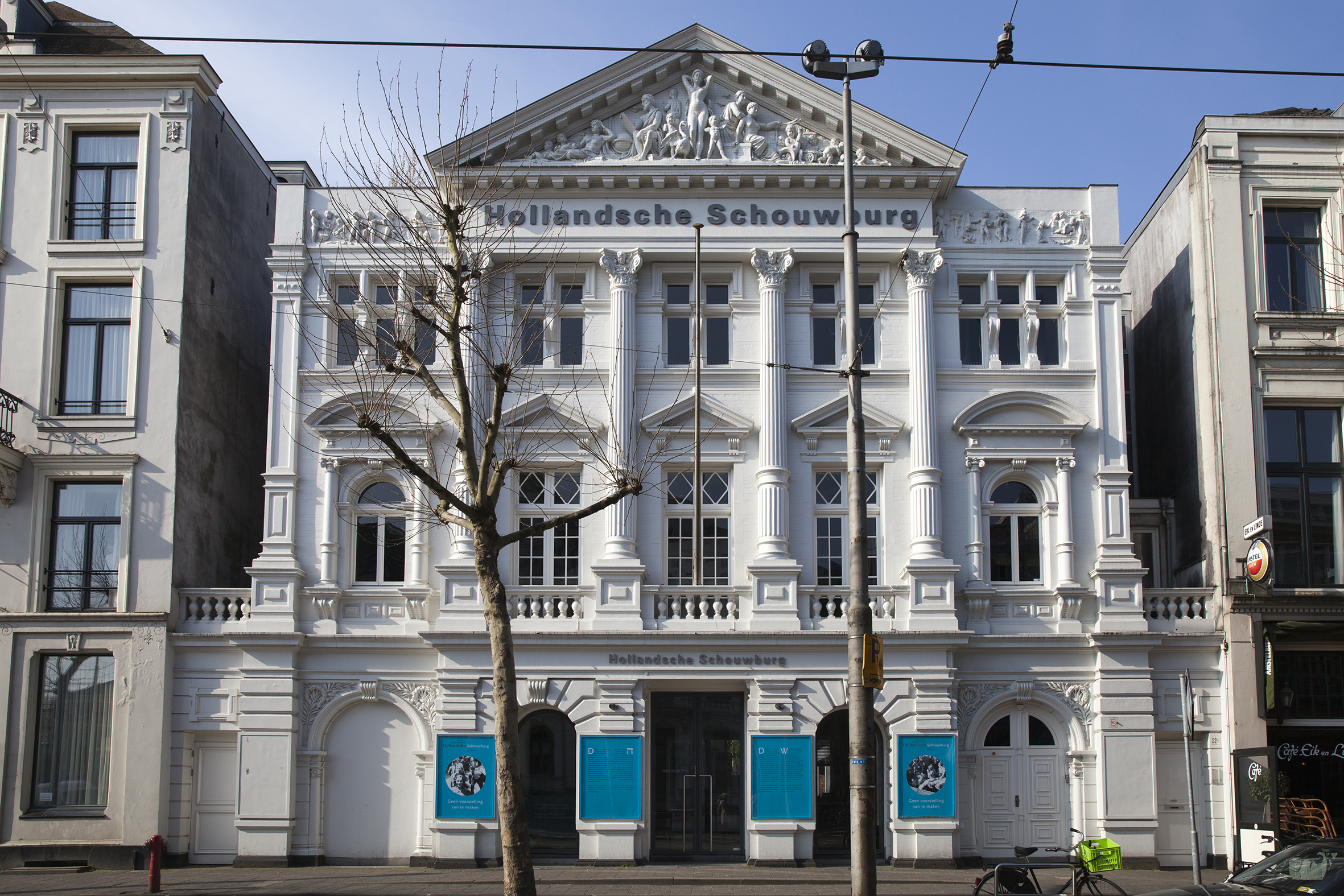 After the war the theater, which had been purchased in 1944 by J.P. Senff, started to be rented out for parties, weddings, and meetings. The municipality of Amsterdam however halted the use of the building for parties because it was deemed inappropriate. In 1946 the Zuid-Nederlandse Toneel groep (Southern Netherlands Theater group) received permission to use the building, but protests arose at the idea to perform theater productions there. From these protests arose the creation of the group Comité Hollandsche Schouwburg (Comity Dutch Theater) that raised money to purchase the building and eventually did so in 1947. The Comity donated the building to the municipality Amsterdam on the preconditions that no amusement programming would take place in the building and that a mourning room would be created with an everlasting lamp, a so called Chapelle Ardente. In the following years discussion surrounding the building remained, but after a visit of de Israeli president Itzhak Ben-Zwi in 1958, it was finally decided that the building would become a memorial place. Most of the building however was taken apart, only leaving the façade of the building, a mourning room with the Chapelle Ardente, and a monument in the courtyard. Protests and discussions have further focused on the text of the remembrance wall, which initially dedicated to gevallen Joods landsgenoten (fallen Jewish citizens). This was deemed inappropriate because the victims of the Holocaust hadn’t fallen, but were instead murdered. The text was therefore changed to Ter herinnering aan hen die van hier werden weggevoerd (In remembrance of those that were deported from here). In 1992 the Hollandsche Schouwburg finally came under the management of the Jewish Historical Museum, and an educative function was added to its memorial function. The first floor of the building now houses an exhibition on the persecution of the Jews in the Netherlands. 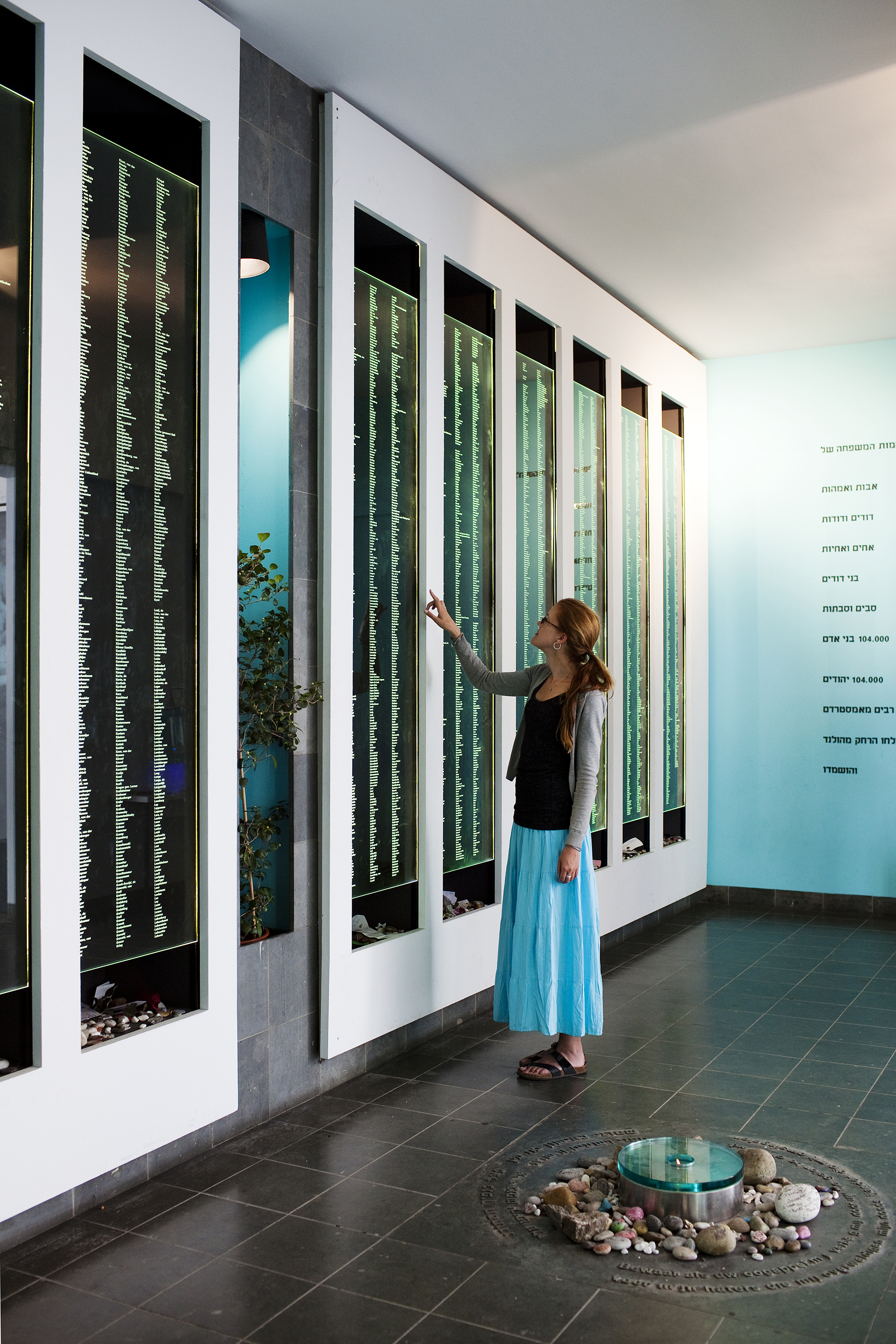 The monument is a continuously growing and never complete monument where visitors can register as user and are invited to add information. It includes at least the basic details of every Holocaust victim in the Netherlands, along with any other available information. Every victim is represented by a pixel and aims to ensure that the men, women, and children murdered in the period 1940-45 will not be forgotten. In the Hollandsche Schouwburg (Dutch Theatre), visitors can use computers to browse and engage with the website, and in the recent National Holocaust Museum a semi-permanent exhibition based on the monument is shown. The larger Jewish Cultural Quarter, of which the Hollandsche Schouwburg (Dutch Theater) is a part, furthermore, in combination with primary and high schools, organizes different trips to their various locations, provides educational materials, and encourages classes to add poems, letters, and projects created by the children to the online monument.