Why is it important do remember the Holocaust?

Before his keynote at the Museum of History of Barcelona (MUHBA) on January 24, 2018, Piotr Ciwinsky was interviewed by a group of students of the Hatkiva school in Barcelona for the TV show InfoK of the public television in Catalonia TV3. Their conversation was be broadcasted in a special on the Holocaust on Monday 29 of January. 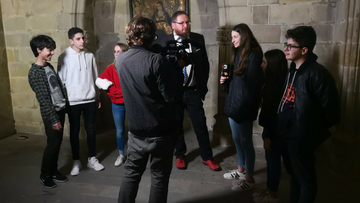