The third issue of the EUROM magazine focuses on tourism and memory. It contains 104 pages including deep articles, reviews and an interview with Michael Rothberg, and is now available online: www.europeanmemories.net/magazine The new Observing Memories explores, among other issues, the relationship between history and tourism through sites of memory and monuments of wars, resistance, and genocides. The geographer Anne Hertzog offers us a theoretical introduction to the treatment of places of memory as tourist spaces, while Piotr Cywinski, the director of the Auschwitz museum, reflects on the Nazi death camp. Marcello Flores and Carlo Giunchi address the problems that have arisen in Predappio, the town where Mussolini is buried, and the plan to create a museum of Fascism. Other places, with their own idiosyncrasies and complexities, are studied in the pages of this issue of Observing Memories: Lenin’s mausoleum (Siobhan Kattago), the memorials of the former Yugoslavia (Aleksander Jakir), the Lipa memorial centre in Croatia (Carlota Sánchez), the 23.5 Hrant Dink memorial in Istanbul (Oriol López) or the remodeled Museum of Free Derry (Adrian Kerr), which is a member of the international EUROM network. Different channels of the transmission of memory are also assessed, in the form of artistic photography (Montse Morcate) or new technologies (Orli Fridman), and current debates also feature such as the management of the memory of slavery in Europe (Celeste Muñoz). In addition, in the section on European memory policy, we are lucky to have the contributions of two specialists of the caliber of Laure Neumayer and Filippo Focardi, and an interview with the specialist Michael Rothberg on the concept of multidirectional memory and recent research. 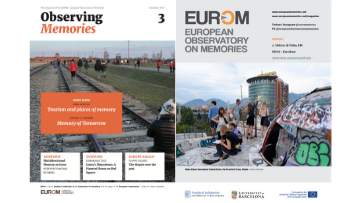